This is the story of my uncle, Robert Leroy McClure, who served in the U. S. Army Air Corps, 8th Air Force, during W. W. II. McClure was a tech sergeant whose specialty was handling incendiary bombs, loading them into B-17’s at an English air base. McClure had done enough of that to realize that there had to be a faster and safer way of loading these bombs into a B-17’s bomb bay than was being done. The standard operating procedure was using block and tackle strung from the roof of the bomb bay, which could lift bombs up into position with human muscle power. McClure was an excellent welder, having built much of the oil field equipment for his father before the war. He decided to build a service cart, complete with hydraulics that could lift bombs up into position in the bay, using its own power source. Thus, he made the turnaround time for loading a B-17 much shorter and safer, since the bombs were lifted into position in a very secure manner. His bomb cart could be used, of course, for any manner of bombs, allowing the planes to get air borne as soon as possible. For this personal initiative, his commander awarded him the bronze star for service. 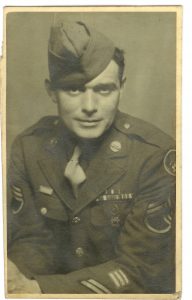