We are placing this commemorative brick along the Path of Remembrance in honor of our father, SMA Silas L. Copeland and our mother, Ann Copeland whom together served this country valiantly for over 30 years. While our father served hardship deployments in WW2, Korean and Viet Nam our mother was active in the military family. We hold them both in the highest regard as some of the finest persons anyone could ever be. Their honesty, loyalty, knowledge and loving arms made this world a better place for our family, our country and the Army. They will long be remembered. Our Father achieved the highest possible enlisted rank of Sergeant Major of The Army. He was awarded many medals over his 32 plus year career, many with badges for valor and many with multiple awards. He earned the trust of the officers he served under by being forthright and honest and a man of action. He always believed in the enlisted soldier and attempted to support them at every opportunity. He set the highest of standards by himself being above reproach. The Army is better for his service and he loved the Army as his own. Our mother was not in the Army but served every single day of those 32 plus years as well. Behind every good soldier is a strong partner keeping the home fires going. Our Mother did a fantastic job at that and our Father knew he had no worries about family when he was on duty. Mom worked with other committed women to help the community and other families while all struggled with husbands gone. She was a rock to keep the family steady. Anyone who knew our Mother and Father will agree, they were 2 very exceptional people! 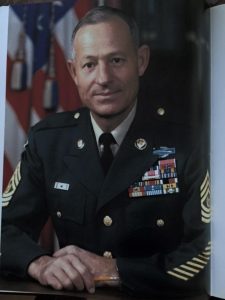