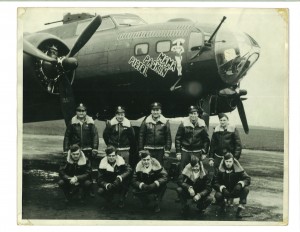 Honored by James and Peggy, Michael and Linda, Cathy and Emil, Connie and Jack, and Eileen and Sal

James P. Gildea, a father of five, proudly served as a tail gunner in a B-17 named Pistol Packin Mama. He flew 26 missions over Germany but spoke only generally of his experiences to his family. We always remembered watching 12 O’Clock High with him and singing “Off we go into the wild blue yonder…”

Our father passed away last year at the age of 92. My brother went to Calverton Cemetery in New York some time after the funeral and when he went to leave, the Army Air Corps hymn was playing on the radio. Dad was a proud man who loved his country and who had a family that was proud and truly loved him.