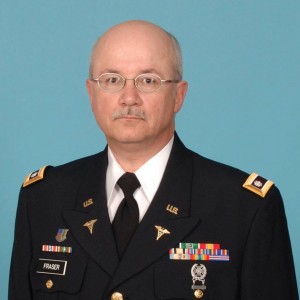 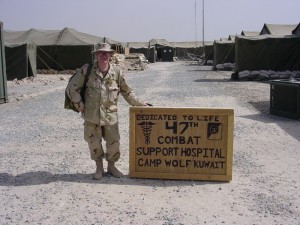 I joined the Army Reserve after the attacks on 09/11/2001. I was a 47-year-old pediatric emergency physician at the time, without prior military service. I thought I was too old, but discovered physicians were highly sought after, and I received an age waiver. I commissioned as a Major on 02/21/2002 and was assigned to the 807th Med. Bde. as a preventive medicine officer (60C), and attached to the 4005th USAH section in Houston. My other specialty is a critical war short specialty, public health and general preventive medicine. I went to a few drills before I went to the 12-day AMEDD OBC at Fort Sam Houston in December 2002. Then I received active duty orders in February 2003 for Operation Enduring Freedom with the 804th Med. Bde., mobilizing at Fort Drum, NY for deployment to Kuwait. I spent two months in Kuwait and one month as liaison officer to the general staff of the commanding admiral of the Spanish coalition task force aboard the SPS Galicia in Umm Qasr, Iraq, with additional preventive medicine duties at nearby Camp Bucca. I did a second three month backfill tour of active duty as pediatrician in the Bayne-Jones Army Community Hospital at Fort Polk, LA in early 2007 during the Iraq surge. I received an honorable discharge, for service-connected disability, from the Army Reserve as a Colonel on 09/01/2013. I am privileged to have served other Soldiers, and the Nation, as a medical Soldier during the Global War on Terrorism.