I bought a brick to honor my father, CSM Herbert Henry Goral, a well respected and highly decorated career Army soldier. He was a man of integrity and a determined leader. Eager to leave North Dakota, he joined the Army in 1939 and retired in 1973, serving 34 years. He first saw combat in World War II in Europe, landing on Omaha Beach D-Day+14 and served in three campaigns with Company E, 330th Infantry Regiment, 83rd Division, ending up a squad leader. He was wounded twice. His favorite story was when a fellow came to talk to him, wearing a helmet and fur jacket and he thought it was a reporter from Life Magazine. The man asked, “What kind of footwear do you have?”, “What kind of rations do you have?” and “How long does it take mail to come from home?” He found out afterwards that it was General Eisenhower. He served in Okinawa, Korea (36th air defense brigade), and four tours in Germany. He was stationed in Vietnam from 1969-1970 as 4th Infantry Division Command Sergeant Major. He served as CSM of the 32rd Army Air Defense Command in Germany before retiring in Ft. Carson. He was nominated for Sergeant Major of the Army twice. He was a great leader that troops respected and trusted, and many generals requested him for their command. In 1968 when the rank of Command Sergeant Major was created, my dad was one of 191 sergeant majors worldwide to be promoted to this new rank. General George V. Underwood, Jr. wrote:”I personally selected SGM Goral as Command Sergeant Major. He is an ideal Sergeant Major – neat as a pin, erect bearing, spotless character, thoroughly dedicated to the Army, completely devoted to his duty, an outstanding teacher and counselor of NCO’s and EM, highly competent professionally, a self-starter, and absolutely fair and square in his dealings with the soldier. He sets a superb example for the soldier. Has been extremely valuable to me as an inspector and troubleshooter. Through his eyes, I get a separate look at my Command from the bottom up. I consider him a thoroughly outstanding soldier in every respect. He has earned a maximum rating and should be promoted to E-10, if that grade is ever established.” He earned the following medals and awards: Legion of Merit with OLC, Bronze Star with 4 OLC, Purple Heart with OLC, Air Medal with 2 Valor & 14 OLC, Army Commendation Medal with OLC, Good Conduct Medal 10 awards, Pre-Pearl Harbor, American Theater, Africa and Europe Theater with 3 battle stars, Victory Medal, Occupation Medal, National Defense with OLC, Korean Defense, Vietnam with 3 battle stars, Vietnam Service Medal, Cross of Gallantry with Palm, Expert Rifleman, Civil Action, French Jubliee, and Combat Infantry Badge. 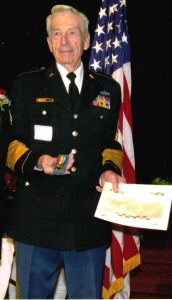