The brick I purchased is i 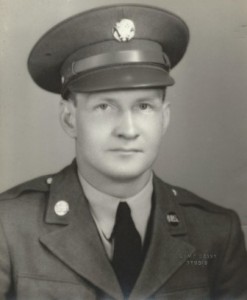 n honor of my late father, Truman E. Smith, who fought in World War II Europe. According to his discharge forms, he landed at Normandy and continued on into combat at the Battle of the Bulge. Dad served with the 4th Infantry Division, Third Army, VIII Corps and was captured along with many of his fellow soldiers. He was awarded 4 Bronze Stars, for which I am very proud. Since my father never spoke of what happened during his war service, as I grew older I needed some understanding of this part of my dad’s life. With the help of a very kind man, of whom I am very grateful, and who had family members who also served during WWII, I was able to research most of my father’s records and found valuable information about his POW interment, but not his military files. I understood they probably had been destroyed in a fire in St. Louis, where Army military records were kept. Nevertheless, this brick is a dedication to my dad, a Veteran and a survivor. He will never be forgotten. (Return to “Why my brick?” Testimonial Page.)