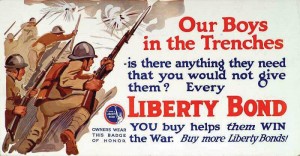 Waging war is a costly enterprise. Congressional Research Service records indicate that World War I cost the United States over $30 billion, while more than $300 billion—the staggering equivalent of roughly $3.9 trillion in today’s dollars—was spent to fight World War II and to supply our allies.

Throughout both of these major 20th century wars, the U.S. Treasury launched and aggressively promoted patriotically-oriented government bond drives to help fund military operations and other wartime expenditures.
World War I’s Liberty Bond drives featured celebrity promoters like Douglas Fairbanks, Mary Pickford, and Charlie Chaplin and organizations like the Boy Scouts of America urging the public to invest in bonds. Posters advertising bond drives across the country included ominous slogans like “Come Across or the Kaiser Will” and conscience-pricking messages like “Our boys in the trenches…is there anything they need that you would not give them. Every Liberty Bond you buy helps them win the war.” The World War I bond drives indeed proved effective. The government raised $21 billion through Liberty Bond sales. 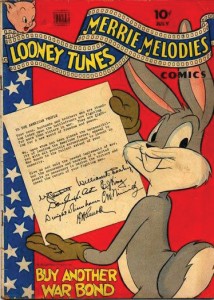 Bond drive tactics and strategy were further refined during World War II. Non-negotiable Series E “Defense Bonds” were introduced in $25, $50, and $1,000 denominations. The $25 bonds became the most publicized and most popular, selling for $18.75 and maturing over a ten-year period to pay the bondholder $25. Beginning in 1942, these bonds—which eventually became better known as “War Bonds”—could be purchased on an installment plan through payroll deductions at the work place. And since one of the ubiquitous wartime slogans was “We’re all in this together,” an installment plan was even established for school children who could buy twenty-five cent war stamps to paste into a book until they saved the $18.75 needed to buy a $25 war bond.

Bond drives were not revived during the Korean or Vietnam wars. Between December 2001 and December 2011, however, Series EE “Patriot Bonds” were offered to Americans as a way of expressing their support for countering terrorism. All proceeds were deposited into a general fund to help finance our nation’s anti-terrorism efforts.