The Army Theater will be a premier feature of the National Museum of the United States Army for visitors of all ages.  The state-of-the-art theater will offer an immersive cinematic experience played on a 300-degree screen that covers 2,000 square feet.  In addition to the awe-inspiring visual displays, the theater will take visitors on a full-sensory experience as fans blow wind, seats rumble and swivel, and thirty-six speakers create a full-surround sound. 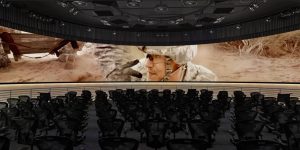 The introductory film, “Of Noble Deeds,” will explore important aspects of the Army— past and present— by focusing on the core values of the American Soldier.  The title of the movie references a speech given by Joshua Chamberlain to a group of combat veterans in 1888. Chamberlain noted, “Noble records that have been made are to be nobly kept….The power of noble deeds is to be preserved and passed on to the future.”  The film will focus on Chamberlain’s call to remember the Army’s past and preserve it for future generations.

The film will set the stage for visitors to the FIghting for the Nation Galleries by giving an overview of Army history and exploring the importance of service to one’s country.  Blending Army history and contemporary events, the film will highlight the core values of the American Soldier— Loyalty, Duty, Respect, Selfless Service, Honor, Integrity, and Personal Courage.  Quotes from a variety of different Soldiers are juxtaposed with historical photographs and video to emphasize the bravery and sense of duty shared by every Soldier.

The film establishes an emotional connection for visitors to actual Soldiers, their stories, and their actions, ensuring that visitors feel connected to the men and women who have served this country and who are honored throughout the Museum.

The theater will have 122 seats and will be nearly three stories high.  While “Of Noble Deeds” will be the free featured film for visitors, the theater will be available for showing other movies and documentaries.  The theater will also be adaptable for public presentations and after-hours special events. This state-of-the-art theater will be an exciting feature for all visitors to the Museum.