While the use of light tanks with the U.S. Army’s armored forces dates back to World War I, the Army’s success with light tanks has been mixed at best.  In World War II, the Army’s M3 (and later M5) Stuart light tanks, armed with a 37mm main gun, were immediately outclassed by heavier armed and armored German tanks in North Africa in 1942-43 and were relegated to reconnaissance roles.  The M24 Chaffee, introduced in late 1944, had a larger 75mm gun, but its thin armor did not allow it to go toe-to-toe with German tanks.  It saw little action in World War II and fared poorly against North Korean T-34s in the early days of the Korean War.  The M41 Walker Bulldog, armed with a more powerful 76mm gun, was an agile vehicle, but was plagued by a noisy, gas guzzling engine.  The M41 never saw action with the U.S. Army, but many were supplied to allied armies, including that of the Republic of Vietnam.

The M551 Sheridan was the Army’s last attempt to produce an effective light tank.  The origins of the Sheridan, named after GEN Philip H. Sheridan (1831-1888), date back to February 1957 with the establishment of the Ad Hoc Group on Armament for Future Tanks or Similar Combat Vehicles (ARCOVE).  In May 1957, ARCOVE recommended that maximum efforts should be made to equip tanks with guided missiles by 1965.  Three months later, Army Chief of Staff GEN Maxwell D. Taylor approved a new tank development program that included a light tank, or armored reconnaissance/airborne assault vehicle (the Army’s official designation), which eventually became the M551 Sheridan.

While development of what would become part of the Sheridan’s primary armament, the MGM-51 Shillelagh guided missile, commenced in June 1959, development of the M551 Sheridan itself began on 17 September 1959.  The key element of the new tank was the untried XM81 gun-missile launcher system capable of firing both 152mm cannon rounds and the Shillelagh missile.  Unlike previous tank gun rounds that used conventional brass shell casings, the XM81 fired rounds with combustible cartridge cases.  Due to the sophisticated nature of this new weapon system, the M551 program ran into numerous delays.  As a result, full-scale production on the Sheridan by the Allison Division of General Motors did not commence until 1966.

Weighing approximately sixteen tons, the M551 Sheridan’s hull was constructed from aluminum alloy, while the turret was made of steel.  The Sheridan was 22 feet, four inches long, 13 feet, 6 inches wide, and 12 feet, 6 inches tall.  Powered by a General Motors 6V53T, six cylinder 300-horsepower supercharged diesel engine, the Sheridan could reach road speeds of nearly 45 miles-per-hour.  It had a cruising range of 373 miles.  The Sheridan was amphibious, capable of swimming across water obstacles at a speed of four miles-per-hour.  It could also be air dropped to provide fire support to airborne units. 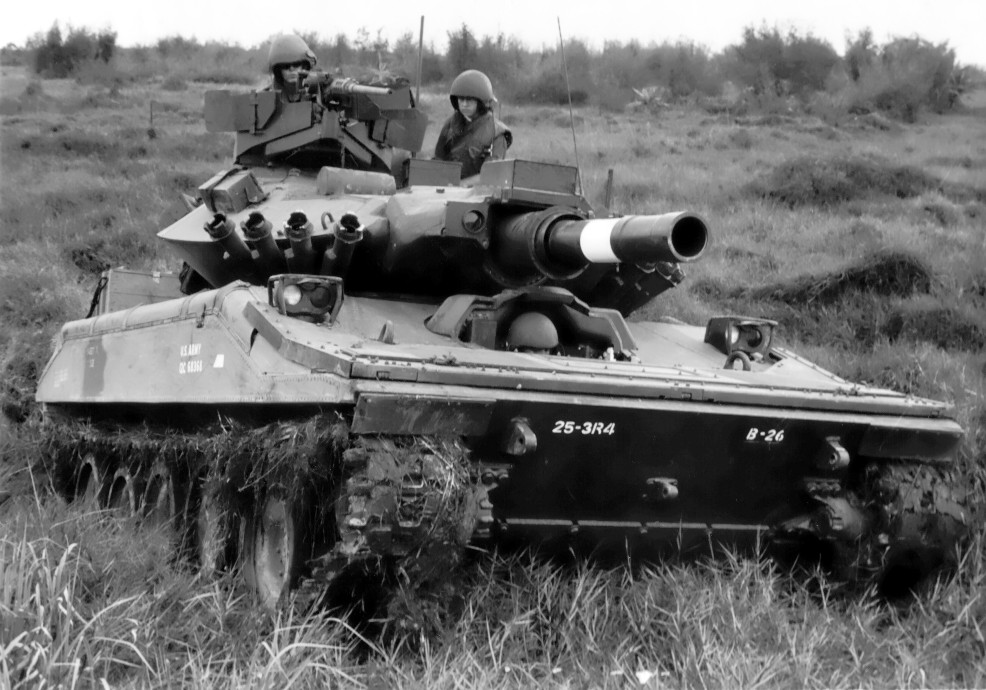 The Sheridan’s main armament consisted of the M81 152mm gun-missile launcher.  The M81 could fire multi-purpose M409 152mm High Explosive Anti-tank (HEAT) rounds.  The Army also developed canister and beehive rounds for the M81, which were effective against enemy personnel.  The Sheridan could carry up to twenty 152mm cannon rounds.  Secondary armament included a 7.62mm machine gun coaxial to the main gun and a .50 caliber machine gun mounted on the turret.  The Sheridan was also equipped with four smoke grenade launchers mounted on the turret.

In addition to cannon rounds, the Sheridan could carry up to eight MGM-51 Shillelagh guided missiles, which were fired through the main gun.  Once clear of the tank, stabilizing fins popped out and the rocket engine ignited.  To guide the missile, the gunner simply kept his sights on an enemy target, while an infrared link sent steering corrections to the missile.  The Shillelagh’s fifteen pound shaped charge warhead could defeat any tank at that time, giving the lightweight Sheridan a significant punch.

The Shillelagh, however, did present problems.  It was significantly larger than conventional rounds, so only a small number could be carried.  In addition, the Shillelagh had a minimum range of 2,400 feet—the missile had to be 2,400 feet away from the tank before the gunner could start tracking it.  The M81’s M409 HEAT rounds had a maximum range of 2,000 feet, leaving the Sheridan with “dead zone” between 2,000 and 2,400 feet.  When the crew fired the main gun, the recoil would often knock out the missile launcher’s electronics.   The only other Army tank to use the Shillelagh would be M60A2, and eventually, none of the missiles were ever fired in anger.

In March 1967, during the height of the Vietnam War, Army evaluators found a number of deficiencies in the Sheridan as they were coming off the production line and into the Army’s inventory.  These problems included the lack of a suitable anti-personnel round for the main gun (canister and beehive rounds were soon developed), armor that could be easily penetrated, and an absence of night fighting capabilities and a bulldozing kit.  Nevertheless, sixty-four Sheridans were deployed to Vietnam in January 1969.

The first Sheridans to arrive in Vietnam were issued to the 1st Squadron, 11th Armored Cavalry, which replaced the M113 Armored Cavalry Assault Vehicles in the unit’s scout sections, and to the 3d Squadron, 4th Cavalry, the 25th Infantry Division’s cavalry squadron, where they replaced the squadron’s M48A3 Patton tanks.  The Army eventually deployed 200 Sheridans to Vietnam.  Since the threat from enemy armor was minimal, none of the Sheridans sent to Vietnam was equipped with missile guidance hardware.

The Sheridan demonstrated that it possessed a number of advantages and over the vehicles it replaced.  It packed far heavier firepower than the ACAVs.  The Sheridans HEAT round was extremely effective against pillboxes and bunkers, while the beehive and canister rounds could mow down waves of enemy infantry.  It was faster and more maneuverable than the M48A3.   It also had a reliable track system—few Sheridans ever threw a track.

The Sheridan, however, also exhibited a number of problems.  It was far more vulnerable to mines and rocket propelled grenades (RPGs) than the M48A3 (additional armor was added to the tank’s floor for protection against mines).  In some cases, enemy heavy machine gun rounds penetrated the Sheridan’s light aluminum armor.  Compounding this problem was the highly combustible caseless main gun ammunition, which if hit, could lead to a catastrophic explosion.  The main gun’s bore evacuator did not always work properly, leaving remnants of the casing in the breach, which sometimes blew back into the tank and created a serious fire hazard.  Moisture sometimes caused the ammunition to swell, making it difficult to load.  Another problem with the main gun was recoil—the Sheridan was simply too light for the tremendous recoil that resulted from firing the main gun.  Some crews reported that the front end of the tank would literally lift off the ground when the gun fired, resulting in various components, such as the radio, coming loose.

The humid, damp weather of Vietnam wreaked havoc with the Sheridan’s electronics.  Crews would often find droplets of water all round the turret, especially around the radio mount.  Engines would become clogged with vegetation and overheat.  The crew compartment was cramped—coupled with the hot weather of Vietnam, crews became easily fatigued.

Production of Sheridan ended in 1970 worth approximately 1,700 vehicles delivered to the Army.  As a result of lessons learned in Vietnam, the Army incorporated a number of improvements.  In 1972, the AN/VVG laser rangefinder was added.  These upgraded versions of the Sheridan were designated M551A1.  Many of these eventually served in Europe with the 11th Armored Cavalry and various divisional cavalry units.

By 1978, the Army began phasing out the M551 without another system to take its place.  By the mid 1980s, only the 3d Battalion, 73d Armor, of the 82d Airborne Division continued to operate the Sheridan.  Some vehicles were also used at the Joint Readiness Training Center at Fort Chaffee, Arkansas (later moved to Fort Polk, Louisiana).

In December 1989, the Sheridan saw its first combat since Vietnam during Operation Just Cause in Panama.  During the operation, the Sheridans of 3-73 Armor were praised for their ability to bring heavy firepower to bear. In 1990, the Sheridan received another upgrade with the addition of thermal imaging sights for the gunner and tank commander.  This upgraded Sheridan was designated M551A1 (Tank Thermal Sight).

During Operation DESERT SHIELD, 3-73 Armor deployed to Saudi Arabia with the rest of the 82d Airborne Division in August-September 1990 and took up positions along the northern Saudi border.  When the ground war started in late February 1991, 3-73 Armor led the 82d Airborne’s advance into Iraq. Company A engaged Iraqi forces at Talil Air Base while the rest of the battalion was used in direct support to eliminate enemy bunkers.  With the inactivation of 3-73 Armor in July 1997, the Sheridan ended its service as a front line tank.  The Army evaluated a number of systems as replacements for the Sheridan, such as the Armored Gun System, but all were eventually eliminated due to budgets cuts.

While the M551 Sheridan was phased out of service with the Army’s armor units, it continued to provide valuable service for many years.  Beginning in the 1980s, some 330 “visually modified” Sheridans were employed by the 11th Armored Cavalry, the Opposing Force (OPFOR), at the National Training Center (NTC) at Fort Irwin, California.  The Sheridans at NTC were modified to resemble Warsaw Pact vehicles during training maneuvers.  Beginning in 2003, Army began retiring the Sheridans at NTC, with the last vehicles withdrawn by 2004.  Many of Sheridans were scrapped, while several were used as targets.  Others were dumped at sea to form artificial reefs.  Today, several Sheridans are on display at Army museums, including the National Training Center and 11th Armored Cavalry Museum at Fort Irwin; the Patton Museum of Cavalry and Armor at Fort Knox, Kentucky; the 82d Airborne Division War Memorial Museum at Fort Bragg, North Carolina; and the Airborne and Special Operations Museum in Fayetteville, North Carolina.