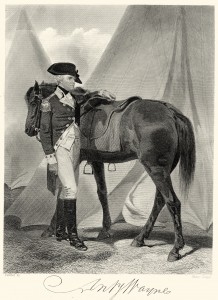 Anthony Wayne was born in Waynesboro, Pennsylvania, on 1 January 1745. As a boy he attended his uncle’s private academy. Later he studied surveying and supervised a land settlement project in Nova Scotia. In 1766, he married Mary Penrose.

In January 1776, Congress made him a colonel of the 4th Pennsylvania Battalion. A year later, he was made a brigadier general in the Continental Army. He was wounded at Three Rivers, and served with distinction at Brandywine. Later he fought at Germantown, Monmouth, Stony Point and Yorktown. Congress awarded him a gold medal for his capture of of the British garrison at Stony Point on the Hudson River. Wayne also blocked the British occupation of West Point when Benedict Arnold defected in 1780. He then fought in the south, retiring in 1783.

From 1791 to 1792, he served in the United States Congress as a member from Georgia. President Washington appointed him to rebuild the Army, and he served as the senior officer in the Army from 13 April 1792 to 15 December 1796. Wayne routed the northwestern Indians at the battle of Fallen Timbers in 1794. He died near Erie, Pennsylvania, on 15 December 1796, while traveling home from the frontier.