I am honoring my father, my hero, Alfred H. Crenshaw who fought in WWII with the 83rd Chemical Mortar Battalion. After OCS he joined the battalion in North Africa and fought with them in Italy, France and Germany. At Anzio, IT his landing craft hit a mine and he was thrown in the water for an undetermined amount of time. He was awarded the Purple Heart for his injuries. After rejoining his battalion he acted as a forward observer and in one instance held his ground, calling in directional fire, while under intense enemy fire. For this heroic act he was awarded the Silver Star. During the war he was also awarded the Bronze Star. LTC Crenshaw joined the Army Reserve and served faithfully until his retirement. He loved his country and was willing to give all for it. 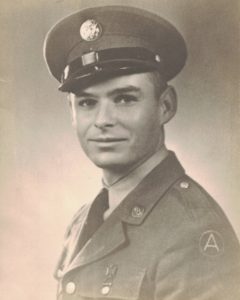