I purchased memorial bricks for my Mother and Father to recognize their 23 years of Army service as a team. They supported each other when Captain Raymond Hambaugh served with the 89th Division in WWII and when he served in the Korean War, earning two Bronze Stars. In peacetime they always looked forward to each new assignment, even it was a hardship tour at an isolated post in Alaska or better overseas posts in Japan and Germany. Ever set of orders brought out a worn atlas with anticipation of the new Post. During my Father’s career they were also stationed in Camp Carson (now Fort Carson), Fort Story, Va, Jefferson Proving Grounds, IN, Joliet Arsenal, Il, and Joliet Army Ammunition Plant, Il. They loved Army Life and were a lifelong team. LTC Hambaugh retired in 1962 and passed away in Paris, TN in 1990.

“Why my brick?” Testimonial Page. 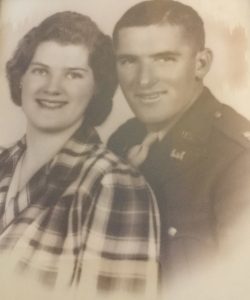