The National Museum of the United States Army (NMUSA) Commemorative Brick program encapsulates the idea that the story of the Army is the story of its Soldiers. Supporters of the Museum continue to choose to purchase bricks to honor the Soldiers in their lives and ensure their names will be preserved at the National Army Museum. Many brick purchasers have also chosen to share their impetus for purchasing bricks with the Army Historical Foundation (AHF) through the “Why My Brick” program. By telling these important stories about Soldiers and their service, supporters can add their personal touch to the Army’s national landmark.

Colonel Russell Olson (USA-Ret.) of Davidson, N.C., a graduate of the Citadel Class of 1969 and Vietnam veteran, chose to purchase bricks in honor of six fallen classmates who served in Vietnam. He noted the importance of these bricks as the Class of 1969 was the last class to lose members in Vietnam. Those honored are CPT Joe W. Eubanks; 1LT Christopher L. Clearwaters; CPT Carter Avery Howell; W01 Ephraim Rutledge Liles, II; 1LT Richard Glenn Repole; and SSG Robert Francis Scherdin. 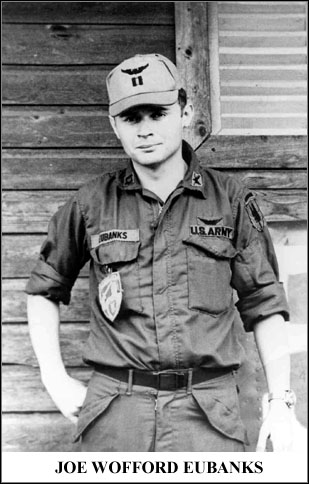 In telling his “Why My Brick” story, Olson drew particular attention to his friend Joe Eubanks who was killed in action June 2, 1972 at the Battle of Kontum. After intense fighting broke out in the Central Highlands region, Joe volunteered to fly into the battle zone to rescue endangered Soldiers. On his third mission, Joe’s helicopter was shot down, leaving him mortally wounded.

Olson concluded, “I strive to emulate Joe’s selfless sacrifice and adherence to the ideals of the Citadel. God bless Joe and my classmates who died in the service of our country. I cherish their memories.”

If you have a “Why My Brick” story to tell or would like to read more stories, visit armyhistory.org/bricks.