Lieutenant Colonel Bill Oakley (USA-Ret.) recently purchased a total of 215 commemorative bricks— the largest single purchase to date— which will be installed on the grounds of the National Museum of the United States Army.  Oakley, who served in the Army for twenty years, explained that he purchased these bricks for members of his family, close friends, and the men he commanded in Company B, 125th Signal Battalion, 25th Infantry Division, in Vietnam. 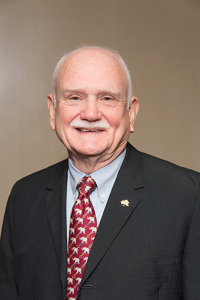 Recalling his service, Oakley noted, “One of the landmark experiences of my life was my tour of duty in Vietnam from February 1967 to February 1968.  I was honored to serve as the Company Commander of B Company of the 125th Signal Battalion, 25th Infantry Division based at Cu Chi, Vietnam. During that time, I commanded a truly outstanding group of young Americans who were committed to the service of our nation.”  Oakley continued, “while each brick is a small recognition to each Soldier, it affords me an opportunity to express my personal appreciation for their dedicated service.”

Oakley’s family connection to the Army is strong.  In addition to his own service, he has family members who have served in World War I, World War II, the Korean War and the Cold War.  He also has a great niece and nephew serving in the Navy today. 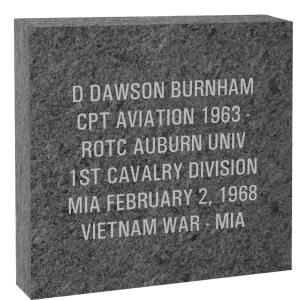 While each of the 215 bricks represents the service of a Soldier who proved important in Oakley’s life, two bricks in particular stand out to Oakley as particularly special.  One is for his great uncle, William Oakley, who served in the Civil War. The second is for Donald Dawson Burnham, a close friend of Oakley’s from high school. Burnham served in Vietnam in 1967 but did not return.  He remains missing in action.

“Lieutenant Colonel Bill Oakley’s massive brick project is truly special. You never know how many lives a Soldier has touched,” remarked Brigadier General Creighton W. Abrams Jr.  “I know our visitors will be truly moved to see their own names or a loved one’s name on the Path of Remembrance and many will be a result of Bill’s thoughtfulness.” 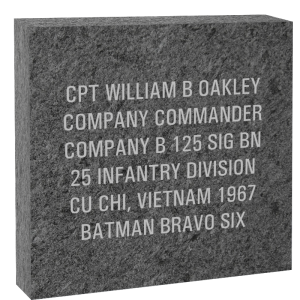 Oakley concluded, “Service to our country and to the U.S. Army is a strong family tradition.  I believe the National Museum of the United States Army will offer a unique opportunity to honor members of my family who have proudly served our nation.  It provides a way to honor Army friends and the valiant young men with whom I served in combat.”

It’s not too late to purchase bricks for your loved ones!  For more information on the commemorative bricks please visit armyhistory.org/bricks or call (855) ARMY-BRX.