Exhibit construction has greatly increased at the National Museum of the United States Army as key elements are being installed.

Recently, a German 10.5 cm Light Field Howitzer was carefully placed in the World War I immersion tableau inside the Nation Overseas Gallery.  The howitzer was a standard weapon used by Germany during World War I.  It fired a 105mm shell weighing around thirty-two pounds and had a maximum range of over 10,000 yards.

The overall scene depicts a battle-ridden landscape from the Meuse-Argonne offensive in 1918. Five cast figures represent American Soldiers from the 140th Infantry Regiment, 35th Infantry Division as they assault a German machine-gun position. 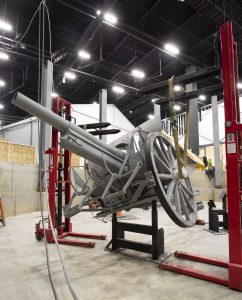 The ground form of the tableau will be constructed by exhibitors based on historical references and images to accurately capture the look and feel of the battlefield. The fighting took place over part of the overgrown Verdun battlefield of 1916 and the harsh terrain consists of eroded craters, pieces of barbed wire, foliage, and debris. Amidst the landscape is the battle-damaged howitzer, slumped over on its side, across a muddy road as the Soldiers charge ahead. The howitzer itself is portrayed as being partially destroyed by American artillery fire, and will be subject to a scenic treatment of mud and debris.

An elevated glass bridge will guide visitors across the entire scene.  Innovative show control technology utilizing large-scale video projection, timed lighting, and surround-sound effects will “immerse” visitors and bring the entire diorama to life. To the right of the scene is a Renault FT-17 tank known as the “5 of Hearts.”  This tank is the only surviving FT-17 tank known to have been used by the American Expeditionary and was installed in August 2017 prior to the Museum walls going up.

Much effort was put into the installation of the howitzer; the angle and height had to be perfect before other exhibit elements are constructed around it to complete the tableau.  The inclusion of the howitzer adds important visual interest to the exhibit. Although this particular gun was not one of the pieces captured by the 35th Division in the Meuse-Argonne, it is one of the hundreds of German artillery pieces captured and sent to the United States after World War I.

This gun was recovered from a veterans’ hall in southern Virginia in “relic” condition and has been stabilized for display.  Before coming to the National Army Museum it was part of the Ordnance Museum collection at Fort Lee, Va.

Now that the howitzer is in place, the construction of the rotunda that houses the immersive  exhibit is under way. Once complete, it will be one of the more dynamic components of the Nation Overseas Gallery.