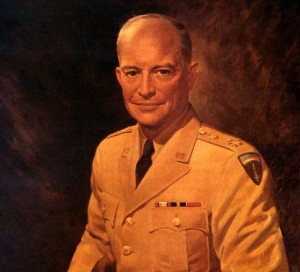 Dwight David Eisenhower was born in Denison, Texas, on 14 October 1890. He graduated from the United States Military Academy in 1915, was commissioned a second lieutenant, and was assigned to the 19th Infantry until 1917. In 1916, he married Mamie Geneva Doud and was promoted to first lieutenant. He was soon made a captain and served with the 57th Infantry. From 1918 to 1919, he commanded the Tank Corps at Camp Colt, receiving temporary promotions to major and lieutenant colonel. Eisenhower then led the Heavy Tank Brigade at Fort Meade, graduated from Infantry Tank School, and commanded the 301st Tank Battalion.

From 1922 to 1924, he served as the executive officer of the 20th Infantry Battalion in the Panama Canal Zone. He reverted to his permanent rank of captain in 1922, but was made a permanent major in 1924. In 1926, Eisenhower graduated from the Command and General Staff School at Fort Leavenworth, Kansas; two years later, he graduated from the Army War College. Next, he served in the Office of the Assistant Secretary of War, and attended Army Industrial College from 1929 to 1933.

In 1941, he became a temporary colonel and brigadier general, and the next year was made a temporary major general and lieutenant general. In 1942, he headed the War Plans Division and Operations Division of the Office of the Chief of Staff of the Army. In 1942, he became the commanding general of the European Theater of Operations. Eisenhower led all Allied forces in the Torch landings in North Africa in 1942, and in Sicily, and Italy in 1943. In 1943, he was promoted to temporary general and the next year to temporary General of the Army. This five-star rank was made permanent in 1946. Eisenhower led the Overlord landings at Normandy in 1944 and served as Supreme Commander Allied Expeditionary Forces in the war against Nazi Germany in Europe. After the war, he commanded the U.S. Zone of Occupation of Germany.

From 19 November 1945 to 7 February 1948, Eisenhower was the Army Chief of Staff. As the Chief of Staff, Eisenhower presided over post-war demobilization, supported greater unification of the armed forces, stressed the importance of research and development, and carried out a reorganization of the Army that decentralized functions. In 1948, Eisenhower retired from active duty and became the president of Columbia University. From 1950 to 1952, he returned to active service as the Supreme Allied Commander, North Atlantic Treaty Organization. Eisenhower was elected President of the United States, and served as President from 20 January 1953 to 20 January 1961. In 1961, he was reappointed General of the Army. Eisenhower died on 28 March 1969, in Washington, D.C.