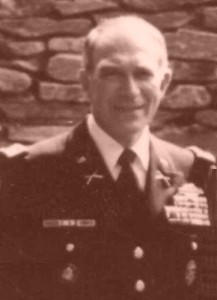 COL Carter was a brave infantry leader in three wars, earning the CIB with two stars and many high decorations. His service ranged from company CO in Italy during WWII to brigade commander in Vietnam and finally, staff officer in the Pentagon. Throughout his years in the Army, from the USMA Class of 1944 through all his assignments during his 30 years of service, COL Carter always held the respect, admiration and affection of his troops. He was a decisive, demanding commander, yet always good-natured, approachable, understanding and friendly to his troops. At the point of this brick dedication, COL Carter’s classmates and contemporaries are nearly all gone, but they prized his friendship to the end of their lives. Today, his family looks at his accomplishments with awe and took great pleasure in dedicating this inscribed brick to him.