With installation of commemorative bricks at the National Museum of the United States Army (NMUSA) in full swing, more and more brick purchasers are choosing to share the story behind their bricks.  Butch Schwoyer recently relayed the story behind his three bricks, purchased for himself, his father, and his son. Schwoyer served in Vietnam and Desert Storm and retired as a First Sergeant in 1992. In recalling his service, Schwoyer said, “I had the privilege of serving and fighting next to the most patriotic and dedicated men and women I have ever met.  I would do it all over again if I had the chance.” He originally purchased a brick for himself to commemorate that transformative time in his life. 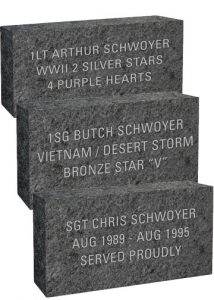 Schwoyer reflected on the significance of these bricks to his family, noting, “Our family, like millions of other Soldier families throughout history, love our country, and wanted to do our part defending the U.S.A.  Through these bricks, we, our family and friends, can now visually observe our patriotic contributions along the Path of Remembrance.  Thank you for providing this special place in history.”