The Springfield Model 1873 was the Army’s standard issue rifle during the Indian Wars of the 1870s and 1880s.  The rifle also saw service in the Spanish-American War and the Philippine Insurrection.  Today, it is a favorite weapon of gun collectors.

The origins of the M1873 Springfield date back to the waning days of the Civil War.  Erskine S. Allin, the master armorer at the Springfield Armory in Massachusetts, was tasked with converting the Army’s muzzle-loading rifles into breech loaders.  This resulted in the development of the Model 1865 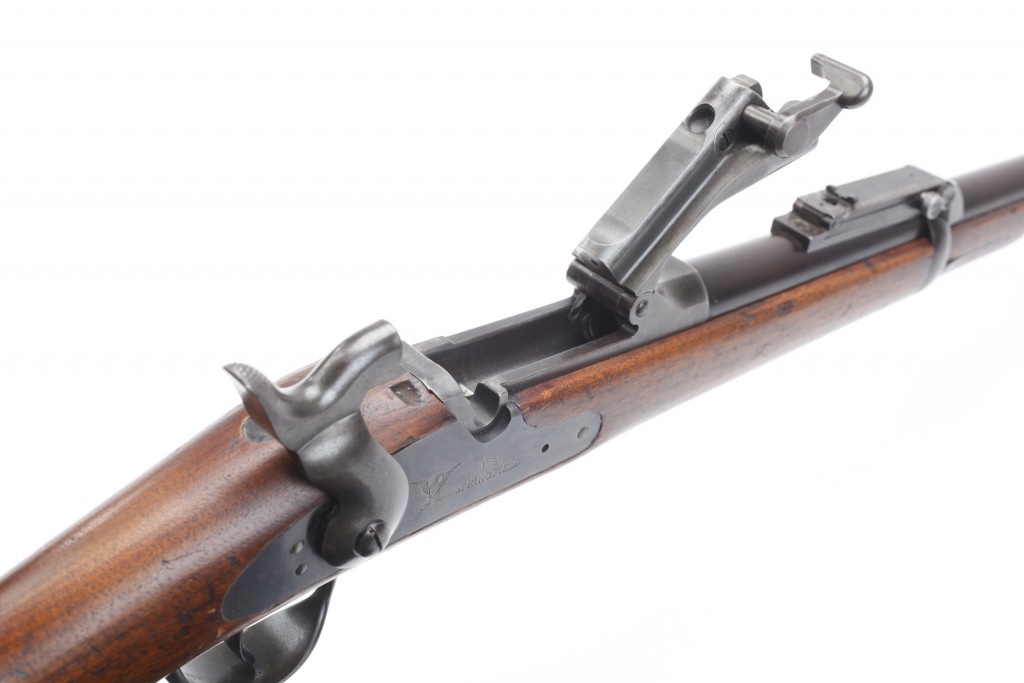 Springfield, known as “Allin’s Alteration” and later the “Needle Gun” for its long firing pin.  The M1865 used a copper-cased cartridge which propelled a .58 caliber bullet with sixty grains of powder.  Allin modified his design by lowering the caliber from .58 to .50 after a series of trials in 1866, resulting in the Model 1866.  On the frontier, the M1866 performed admirably during several engagements with Indian warriors, and it gained a reputation as a dependable firearm.  However, there were flaws in its design, most notably, the breech block tended to swing open when under pressure.  Eager to correct this flaw, the Ordnance Department began a series of trials to find a suitable replacement to the M1866.

In 1873, the Ordnance Department adopted the Springfield No. 99 as the standard infantry weapon of the U.S. Army.   Later designated the Springfield Model 1873 and nicknamed the “Springfield Trapdoor,”  the rifle would serve the American military for the next twenty years.  The rifle got its nickname from its breech-loading mechanism, which resembled a trapdoor.  To load a round, a soldier had to open the latch and manually insert a single cartridge.

The M1873 had a 32 5/8-inch barrel and fired a new .45-70 cartridge.  The new round could deliver a 405 grain bullet at a muzzle velocity of 1,350 feet per second.  Not only was the cartridge an excellent anti-personnel round, it could also bring down a horse.  In addition to its impressive firepower, the M1873 was one of the first rifles to have a blued steel finish rather than the more reflective “National Armory Bright.” 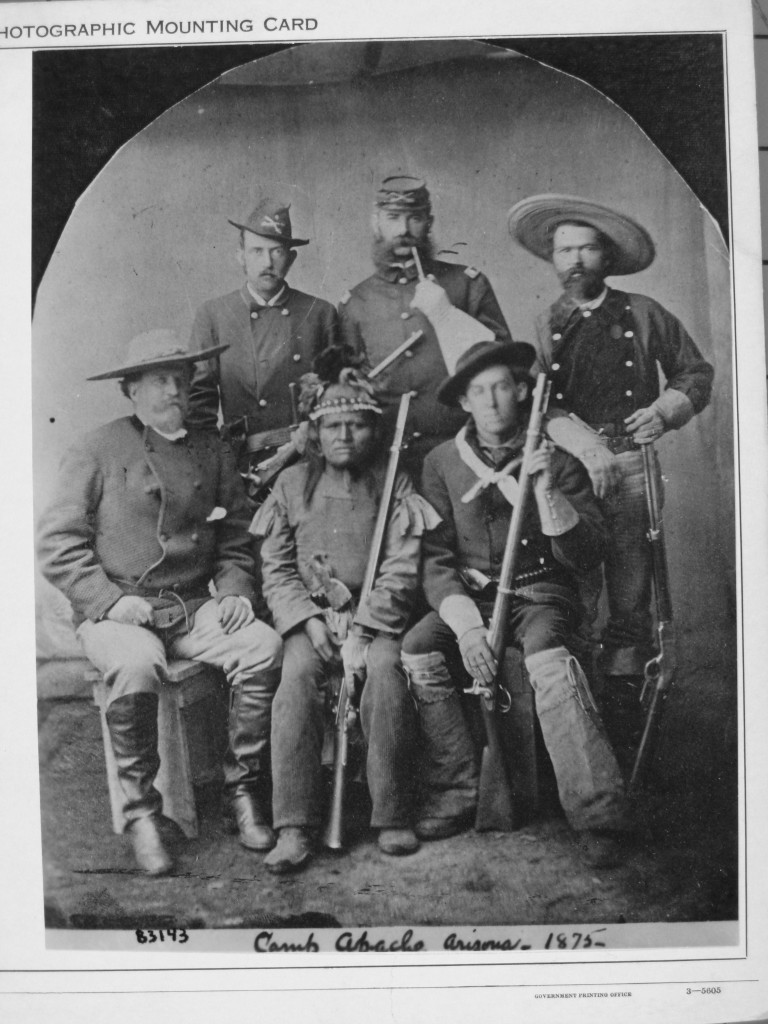 The 10th Cavalry, stationed in San Antonio at Fort Sam Houston, was among the first  units to receive the new rifles in the spring of 1874.  By 1875, the M1873 began to replace the Army’s stocks of older rifles.  Cavalry units armed with the Sharps carbine were re-equipped with a carbine version of the M1873, which had a reduced barrel size of twenty-two inches.  It fired a variant of the .45-70 cartridge, the .45-55, with a reduced powder charge of fifty-five grains as opposed to the normal seventy grains.

The M1873 performed well in combat, and a cavalryman described it as a weapon that “would shoot and kick hard, carrying up to 500 yards very well.”  While it was an effective weapon, the M1873 had a powerful recoil, and many soldiers who used it would claim that the rifle could knock down two men with each shot—the man it hit and the man who fired it.

The disaster at Little Big Horn on 25 June 1876 led many within the Army to criticize the M1873’s performance.  During the Little Big Horn campaign, Lieutenant Colonel George A. Custer ordered an attack that would go down in American military history as the greatest blunder of the Plains Wars.  With Major Marcus A. Reno’s column repulsed by the Sioux, the Indians were able to reform and surround Custer’s force.  The troopers of the 7th Cavalry fought bravely, but were eventually overwhelmed by the attacking Sioux and Cheyenne’s superior numbers and firepower.  No member of Custer’s detachment survived the day.  In addition to sparking public outrage against the Indians, Custer’s ill-fated excursion into the Black Hills brought the various flaws of the Springfield Trapdoor to light.

The problem, however, lay not with the rifle itself but with the ammunition.  The Army had yet to switch over to brass cartridges and still relied on copper.  Firing the rifle created heat that caused the copper cartridges to expand, making the spent cartridge difficult to extract from the breech.  One method to remove it was to pry it out with a knife.  The M1873 field manual instructed soldiers to push the cartridge out with a cleaning rod, but this presented a problem since the M1873 carbine was not equipped with a cleaning rod.  Trooper William C. Slaper of Company M, 7th Cavalry (part of Reno’s column at Little Big Horn), noted that during combat he would fix a jam, pass the loaded rifle to a soldier on the firing line, and then fix another.

Condemnation of the rifle was not universal, as many troopers praised the M1873’s power and accuracy.  Brigadier General John Gibbon described the rifle as “first rate…and probably the best thing that had ever been placed in the hands of troops.” 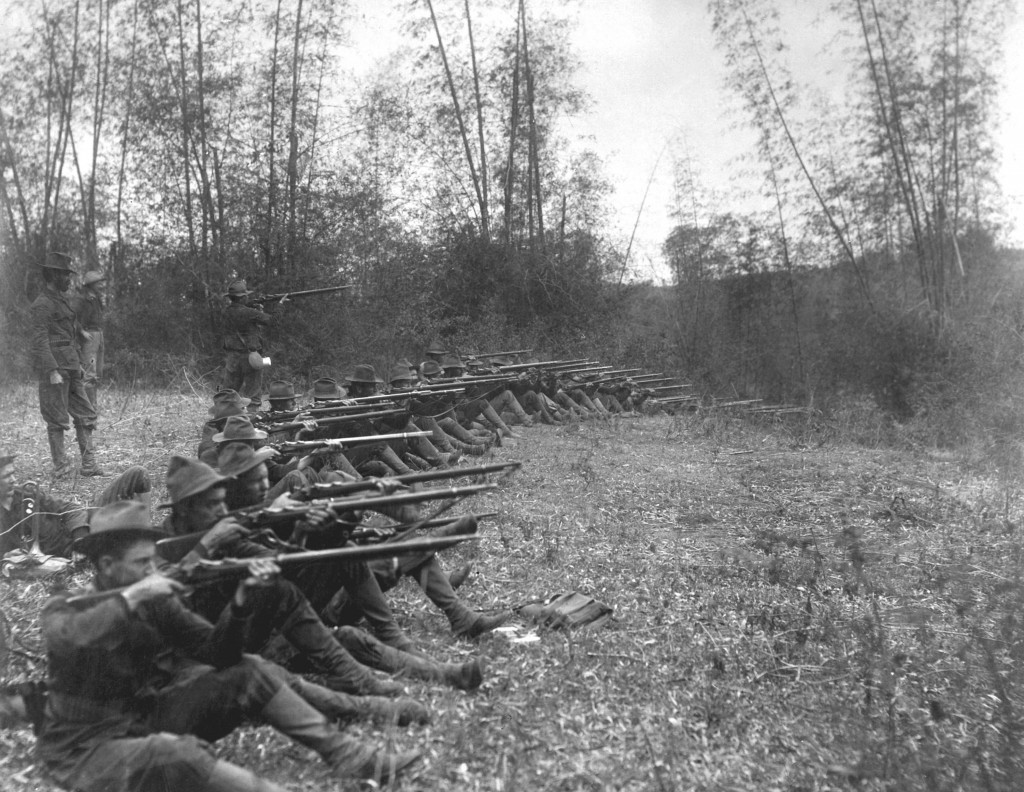 In 1877, the Ordnance Department began researching European small arms and found that brass cartridges were much easier to load and retained their form after discharge.  Additionally, solid point cartridges could be reloaded with an external primer (this task became a form of extra duty punishment on the frontier).  In 1882, the Ordnance Department switched over to centerfire cartridges.  However, it was not until 1888 that the Army finally made the transition to brass shells.

Though the rifle was accurate up to 1,000 yards in the right hands, most soldiers in the decades following the Civil War did not receive any significant marksmanship training.  Most soldiers were only given ten cartridges a month with which to practice, and some units did not even receive that much.  In 1877, Lieutenant Stephen Mills stated that “target practice was practically unknown.  I think the allowance of ammunition was twenty rounds a year.”  By 1878, the state of marksmanship training had become so bad that the Department of the Pacific ordered .58 caliber muzzle-loading rifle-muskets to be taken out of storage so that troops could practice shooting.  As soldiers’ accuracy improved, the Army began to hold shooting matches with Springfield Trapdoors.  The idea behind the shooting competitions was to prepare soldiers for fighting on the open plains, and ensure that the best shots would come away victorious.

The Springfield Trapdoor and other single-shot rifles would be rendered obsolete by magazine-fed bolt-action rifles in the late nineteenth century. In addition, the invention of “smokeless powder” had rendered rifles using black powder obsolete.  The Krag-Jørgensen rifle became the Army’s standard 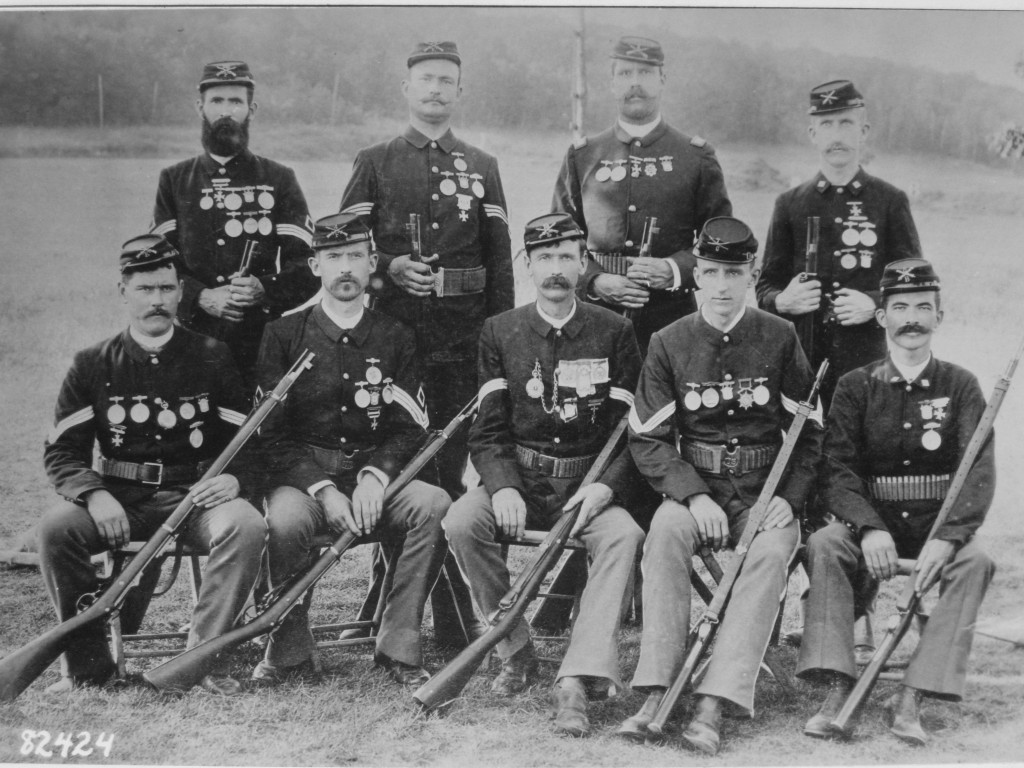 issue weapon in 1894 and was used in the Spanish-American War and the Philippine Insurrection by Regular Army units and a few Volunteer regiments before being replaced by the Model 1903 Springfield rifle.    However, due to production problems with Krag, the M1873 was still issued to most Volunteer formations that served in the Spanish-American War and in the Philippines.  Soldiers soon found that the M1873 was a liability on the modern battlefield with its limited firepower.  Unlike the Krag, which had a five-round magazine, the Springfield Trapdoor had to be manually reloaded after firing a round.  It also produced prodigious amounts of smoke when fired because it still employed cartridges using black powder, giving away the shooter’s position.  Eventually, Volunteer and National Guard units were re-equipped with Krags after the M1903 was introduced .

Though it was phased out of service, the Springfield M1873 remains an icon of the American West.  With its retirement came the end of an era.  Today, it remains a popular weapon for gun collectors in the United States and around the world.