SSgt Laurence Novak.  Honored by his daughters, Janice and Jeannette. 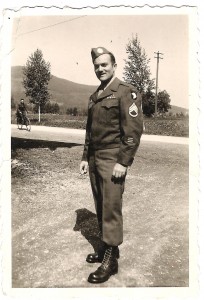 SSgt Lawrence Novak – “Screaming Eagle” 1942-1945 — Our father, Lawrence Novak, passed away in 1977 (b.1919). Our mother (dec. 2014), our brother (Air Force 1978-84) (dec. 2002), my sister and I never had the chance to hear his story as a Paratrooper in the 101st Airborne Division in WWII. This brick gives us the chance to honor our father’s memory and gives our family a chance to connect to his heroic service. Our father enlisted in the Army, was processed through Fort Custer, Michigan in 3/1942 and trained at Camp Claiborne and Fort Bragg. He was appointed Staff Sergeant in 7/1943 and sailed to England in 10/1943. While overseas, he was a member of the boxing team. He was engaged in warfare from 6/1944 – 6/1945. On D-Day, our father landed on Utah Beach. In 9/1944, he went into Holland by glider. He fought in Normandy, the Battle of the Bulge, Bastogne, Germany and Central Europe. Our father was present at the encounter of one of the first concentration camps and at the capture of Hitler’s mountain retreat in Germany. SSgt Lawrence Novak received an Honorable Discharge in September 1945. Among our father’s awards are the Combat Infantry Badge, Bronze Star, two Presidential Unit Citations, 101st Airborne Division Patch and Army Airborne Glider Badge. Our membership in the Michigan Chapter of the 101st Airborne Division Association gives us the chance to understand his experience through the stories told by other Veterans.(Return to “Why my brick?” Testimonial Page.)