Mabry James Anders was born in Yuma, Arizona on July 22, 1991. After graduation from high school in 2009 Anders entered the United States Army in January 2010. He attended Basic and Advanced Individual Training at Fort Jackson, South Carolina as a 91B Light Wheeled Vehicle Mechanic. His first duty assignment was with Bravo Company, 302nd Combat Sustainment Support Battalion (CSSB), Camp Stanley, Korea where he served as a Recovery Vehicle Operator, and was later reassigned to Echo Company 302nd CSSB, Camp Casey, Korea. He served in Korea from June 2010 to June 2011. SPC Anders PCS’d to Company A, 4th Special Troops Battalion, 4th Brigade Combat Team, 4th Infantry Division based in Fort Carson, Colorado. In March of 2012, SPC Anders deployed with the Headquarters and Headquarters Company and was attached in theater to Alpha Company, 4th Brigade Special Troops Battalion, as the MRV operator and driver for two Route Clearance Packages in support of Operation Enduring Freedom XIII. He was killed in action at Kalagush, Afghanistan on August 27, 2012 at 7:35 a.m. After the Soldier’s convoy encountered an IED (roadside bomb), he dismounted to patrol the area for secondary devices. Mabry then went to work recovering the damaged vehicle when he was then engaged with small arms fire by an Afghanistan National Army member. He died of those injuries. Mabry always gave everything his all and in the end he gave all he had. Mabry is greatly missed by everyone who knew him. He is best known for his sense of humor, beaming smile, generosity and most of all friendship and love. We miss his fearless spirit and love of life. Mabry was a fun-loving young man. He lived life to the fullest. Mab loved the outdoors, riding dirt bikes, off-roading in his jeep, horseback riding and flying helicopters. His humor, strong sense of friendship, encouragement and compassion touched many lives. Mabry was dedicated to his family, friends and his brothers-in-arms. He loved serving his Country and those he served with. A friend quoted Mabry as saying, “If you want to learn something in this life, learn how to live!”. SPC. Anders was buried with full military honors at the Haines Cemetery in Haines, Oregon. He is honored at the Memorial for the Fallen at Fort Carson, Colorado. His military education includes the Light Wheeled Vehicle Mechanic Course, Route Recon Clearance Maintenance Course, and the Combat Life Saver Course. His awards and decoration include the Bronze Star Medal, Purple Heart, Army Achievement Medal, Army Good Conduct Medal, National Defense Service Medal, Afghanistan Campaign Medal w/Bronze Service Star, Global War on Terrorism Service Medal, Army Service Ribbon, Overseas Service Ribbon, NATO Medal, Combat Action Badge, and the Driver/Mechanic Badge. (Return to “Why my brick?” Testimonial Page.) 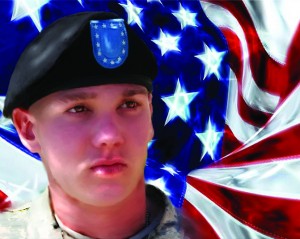