Illinois, Maryland, and Alabama have a peculiar bond. They all have counties or cities named after MG Richard Montgomery, a martyr of the American Revolution. He trained as a British soldier and fought in the French and Indian War before becoming a “rebel” and an officer in the Continental Army. He died in the first charge of one of the first battles of the Revolutionary War, but his legacy as a war hero lives on.

Born in Swords, County Dublin, Ireland, on 2 December 1738, Montgomery was educated at St. Andrews and Trinity College before enlisting in the British Royal Army in 1756. During the French and Indian War, he served with his regiment at the siege of Louisbourg and in the Lake Champlain campaign of 1759. After the fall of Montreal, Montgomery was transferred to the Caribbean, where he oversaw the capture of Martinique and Havana. Shortly after he was promoted to captain in May 1762, the Treaty of Paris ending the war was signed, and Montgomery was sent home to England two years later.

Montgomery became frustrated by his lack of promotion in the British Army, and by the Royal government’s antagonistic relationship with the colonies. He attempted to purchase a major’s commission, but this was thwarted with the ascension of Prime Minister Frederick, Lord North, to power. Disgusted, Montgomery sold his commission in April 1772 and purchased a farm near Kings Bridge, a town thirteen miles north of New York City. He isolated himself from colonial politics and pressures and married Janet Livingston, daughter of the wealthy Judge Robert R. Livingston. But as tensions grew between the colonies and Britain, Montgomery joined the rallies against the crown. Although he did not vie for the position, on 16 May 1775 he was elected to represent Dutchess County in the New York Provincial Congress, largely because of his procolonial views and because his fellow New Yorkers viewed him as a man of great integrity.

Much to his chagrin, he was appointed a brigadier general in the Continental Army on 22 June 1775. Despite his reluctance to leave his new wife and farm, Montgomery wrote, “the will of an oppressed people…must be respected.” He was designated second in command of the American forces New York, and on 26 June, he and his superior, MG Philip Schuyler, were given orders to invade Canada. At their headquarters at Fort Ticonderoga, he labeled his troops as the “sweepings” of society and the officers as “vulgar.” He shaped these misfits into an effective army as they advanced down Lake Champlain to lay siege to several Canadian towns.

Schuyler was forced to step down due to poor health on 16 September, leaving Montgomery in command. Doubling his efforts, Montgomery captured Fort Chambly and St. John’s on 19 October and Montreal on 11 November. He then advanced south to seize Quebec City. On 2 December, his 37th birthday, he linked up with BG Benedict Arnold, and their combined forces besieged the city while attempting to find a way to breach the town’s fortifications.

Montgomery created his battle plans based on the advice of friendly Canadians who told him that if he were to charge the lower town, the merchant families would force Sir Guy Carleton, the British commander in Quebec, to surrender rather than lose their supplies. With many of the American troops’ enlistments about to end on 1 January 1776, Montgomery and Arnold launched a courageous attack at 0400 on 31 December in the middle of a snowstorm. Montgomery had many factors in his favor including a full moon, a drunken British Army celebrating the New Year, and the snow. During the opening charge, Montgomery led from the front, yelling to his men, “Push on brave boys, Quebec is ours!” The attack, however, was doomed to failure, and Montgomery was killed by a point-blank blast of grapeshot from a hidden British position, without ever knowing that he had been promoted to major general on 9 December. In addition, Arnold was badly wounded in the leg, and many more of the attacking troops were either killed or taken prisoner. 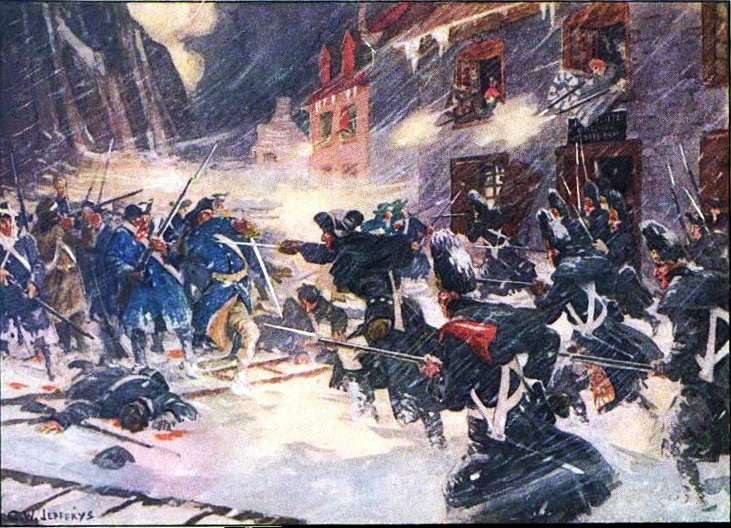 The remaining forces, confused and blinded by the snow, retreated from the city. Aaron Burr, the future Vice President, who fought at Montgomery’s side during the assault, attempted to pull the general’s body from the snow, but the large snow drifts made this nearly impossible, and Burr abandoned Montgomery’s body in Quebec. At daybreak, the British found Montgomery’s body and subsequently buried him with full military honors.

In 1776, Congress erected a marble memorial to Montgomery in the graveyard of St. Paul’s Cathedral in New York City. In 1818, the Canadian government relinquished his remains and he was buried under the memorial. While his service in the Continental Army was brief, Montgomery’s leadership skills and battle experience were vital to the revolutionary cause.