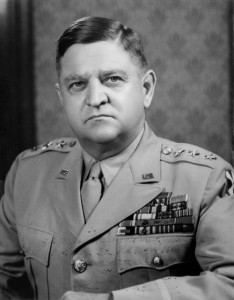 After a distinguished career as commander of XX Corps during World War II and command of Fifth Army following the war, LTG Walton H. Walker assumed command of Eighth Army in September 1948. At that time, Eighth Army’s duties focused on the occupation of Japan and not on combat readiness. Walker’s Chief of Staff, COL Eugene M. Landrum, stated that Walker came to Japan anticipating “a nice cushy time, beautiful quarters and easy duty” before his eventual retirement. On 25 June 1950, all that changed when North Korea launched an invasion of the Republic of Korea across the 38th Parallel. Within days Walker was organizing ROK and U.S. troops for the defense of South Korea. Walker’s leadership allowed time for U.S. and ROK troops to establish an effective defensive perimeter around the port city of Pusan and made him one of the first heroes of the Korean War.

Walton Harris Walker was born 3 December 1889 in Belton, TX. He entered the Virginia Military Institute in 1907, but transferred to West Point a year later. After graduating in 1912 and receiving a commission in the infantry, he participated in the occupation of Vera Cruz, Mexico. In 1916, he served along the Mexican border in the same regiment with LT Dwight D. Eisenhower. The two became close friends and hunting companions.

During World War I, Walker served with the 13th Machine Gun Battalion, 5th Division, and participated in the St. Mihiel and Meuse-Argonne offensives. He was awarded a Silver Star and was later appointed to temporary rank of colonel during occupation duty.

After returning to the U.S. in late 1919, Walker reverted to his permanent rank of captain and served in variety of assignments. He served as an instructor at the Infantry School at Fort Benning and the Coast Artillery School at Fort Monroe. From 1930 to 1933, he was assigned to the 15th Infantry in Tientsin, China, and later served for three years on the Army Staff in the War Plans Division (1937-40).

Shortly after the U.S. entered World War II, Walker was given command of the 3rd Armored Division and promoted to major general. In September 1942, he took over IV Armored Corps. In October 1943, the unit was redesignated XX Corps, and in February 1944, Walker was ordered to England to prepare for the invasion of Europe. He led the XX Corps ashore in July 1944 as part of LTG George S. Patton’s Third Army and distinguished himself in the drive across France in the summer of 1944. XX Corps eventually became known as the “Ghost Corps” because of the speed of its advance. When Patton turned most of the Third Army north to stem the German offensive, Walker was left with the difficult task of covering all of the Third Army’s former front. He finished the war with three stars and high praise from Patton and Eisenhower, who called Walker “a fighter in every sense of the word.”

Walker was a protégé of Patton in many respects. While he lacked the imposing stature of his mentor and did not possess the same leadership qualities, he was certainly a tough and aggressive no-nonsense soldier. While he already had the nickname “Johnnie” (for a particular brand of Scotch), Walker also earned the nickname “Bulldog” because of his gruff public image.

In September 1948, Walker assumed command of Eighth Army in Japan, which consisted of four understrength divisions (1st Cavalry and 7th, 24th, and 25th Infantry Divisions). Walker made efforts to improve the combat readiness of his troops, but when war broke out in Korea in June 1950, it quickly became apparent that Walker’s efforts were too little and too late. Lacking heavy equipment and combat experience, the U.S. and ROK forces suffered heavy losses and were steadily driven south down the Korean peninsula. With his troops blunting the North Korean offensive, Walker established a 140-mile perimeter around Pusan and drove off several North Korean attacks. On 15 September, Walker began advancing the Eighth Army north in order to link up with the X Corps landings at Inchon.

After linking up with X Corps on 26 September, Walker’s army moved north along the western side of North Korea, capturing Pyongyang on 19 October. After capturing the North Korean capital, Walker advanced cautiously out of concern for his right flank and possible Chinese intervention. His fears became a reality when on 25 November, Communist Chinese forces launched an all out attack on U.N. troops. Walker was forced to retreat back across the 38th Parallel in the face of heavy attacks. On 23 December, while speeding to present the Commonwealth Brigade with an ROK Presidential Unit Citation, Walker was killed in a jeep accident just north of Seoul. He was buried in Arlington National Cemetery and posthumously promoted to general in January 1951.