The Viet Cong called them “Fire Dragons,” because their high volume of fire and tracer ammunition gave the appearance of a dragon’s breath. Their U.S. Army crews called them “Dusters,” due to the large clouds of dust they created as they sped across the dirt roads of Vietnam.

The M42 was a 1950s continuation of the U.S. Army’s World War II era concept for a highly mobile, rapid firing anti-aircraft artillery system designed to protect maneuver forces from low-level air attack. The precursor to the M42 was the M19 Gun Motor Carriage, which was produced in 1944. The M19 was based on the M24 Chaffee light tank chassis and was equipped with twin 40mm Swedish Bofors anti-aircraft guns mounted in a power driven open-topped turret or rotating shield. Although only some 285 M19s were built, the system demonstrated its effectiveness both as an anti-aircraft gun and occasional ground support weapon.

With the outbreak of the Korean War, the continuing need for a self-propelled anti-aircraft gun, particularly one that could double as a ground support or infantry assault weapon, became apparent. Accordingly, in 1951, the Army began developing an upgrade to the M19 system. The result was the M42, a member of the M41 family of armored vehicles, all of which shared several common components. The M41 family was produced by the Cadillac Motor Car Division of General Motors Corporation and the first production models rolled out of their Cleveland Tank Plant in 1951. Production of the M42 began in early 1952. The Army began accepting delivery of the M42 in October of that year; the first vehicles entered Army service in 1953. 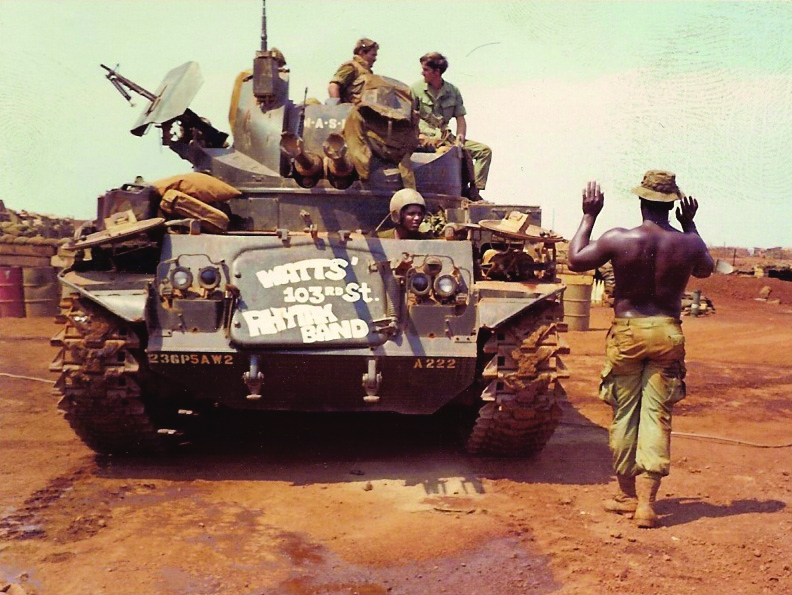 A Continental AOS-895-3 six-cylinder, four cycle, opposed, air-cooled, supercharged gasoline engine served as the vehicle’s power plant. This gave the M42 a maximum road speed of 45 mph (72 kph) and its 140 gallon (530 liter) fuel tank allowed for a cruising range of 100 miles (161 km). The M42 boasted a torsion bar suspension system, with five individually sprung dual/track road wheels and hydraulic shock absorbers on the first, second and fifth road wheel stations. This gave the vehicle the ability to cross a 6 foot 4 inch (1.828m) trench, clear a 2 foot 4 inch (0.711m) vertical obstacle, climb a sixty degree gradient and ford depths up to four feet (1.2 m). This excellent suspension system, combined with its high ground clearance, enabled the M42 to withstand land mine explosions with only minimal casualties to the crew.

The interior hull of the M42 was divided into three compartments. The forward compartment housed the driving controls and instruments, with seats for the driver and commander-radio operator. The central compartment served as the base for the gun mount and storage for up to twelve boxes of 40mm ammunition (480 rounds). The rear compartment housed the main engine, transmission, auxiliary generator, and the fuel tank.

The M42 was designed to carry a crew of six, although a four-man crew was normal in actual combat conditions. The crew was composed of the commander-radio operator (seated in hull right front), driver (hull left front), gunner (turret left), sight setter (turret right), and two loaders (turret rear).

The turret of the M42 was designed to fit the M41’s existing hull turret ring without modification. The turret was essentially the same as that used on the M19, retaining the combat proven and highly effective 40mm Bofors guns. The turret could traverse 360 degrees either by its hydraulic power system or manually. The guns, also powered hydraulically or manually, could elevate to plus eighty-five degrees or depress to minus three degrees. By using the manual controls, a further plus/minus two degrees could be obtained, giving a maximum plus eighty-seven degrees elevation and minus five degrees depression. The 40mm guns were clip-fed and fired a four-round clip of either armor piercing or high explosive tracer rounds. Their rate of fire was 120 rounds per minute per barrel, or a total of 240 rounds per minute. The gun system, designed for direct-fire, had a maximum anti-aircraft range of 5,000 meters and a maximum ground-to-ground range of 9,475 meters. Early models of the M42 had conical flash suppressors on the 40mm guns, but these were later changed to three-pronged flash suppressors. For vehicle defense, a Browning .30 cal. M1919A4 flexible machine gun could also be mounted at the front or rear of the turret.

During initial development, the Army had planned to combine the M42 with a second vehicle housing a radar fire-control system, but high costs rendered the plan untenable. The operating system, or engagement sequence, of the M42 was initiated when the vehicle commander located and designated a target. The commander estimated the target’s speed, direction and angle of flight, setting this information into the M38 computing sight. The driver would then engage the power drive, traverse the turret, and elevate the guns until the target was centered in the M24C reflex sight, which automatically computed the lead angle based on the target’s speed and direction. Once the sight was steadily tracking the target, the driver would inform the commander, who, when the target was within range, would give the command to fire. The driver would then engage the power control firing system and the guns, hand-fed by the two loaders, would continue firing until either the target was destroyed or the commander ordered cease-fire.

From 1953 until the end of the Korean War the M42 served in the anti-aircraft battalions of the armored divisions. In 1956 a second model, the M42A1, was developed. The A1 model had a new AOSI-895-5 engine with a fuel injection system, the same used on the upgraded Walker Bulldog light tank variants, the M41A2 and M41A3. The improved engine system increased the M42’s cruising range to around 120 miles (190 km).

Production of the M42A1 was eventually halted in December 1959, but the system continued to be used in Army service until the early 1960s, when it was then transferred to the National Guard. Army studies had shown that guns could no longer provide adequate protection against enemy aircraft and would therefore be replaced by missile systems. During its nearly seven year production run, from 1952 to 1959, a total of 3,700 M42/M42A1s were built. In the early stages of the Vietnam War, the Army began recalling the M42A1s from the National Guard and organizing them into air defense artillery (ADA) battalions. In late 1966, the M42A1s began arriving in Vietnam. In all, three M42A1 equipped ADA battalions were deployed to Vietnam: 1st Battalion, 44th Artillery (Automatic Weapons, Self-Propelled), supporting the 3d Marine Division in northern I Corps; 5th Battalion, 2d Artillery (Automatic Weapons, Self-Propelled), assigned to II Field Force Artillery in II Corps; and 4th Battalion, 60th Artillery (Automatic Weapons, Self-Propelled), assigned to 41st Artillery Group, I Field Force Artillery, in III Corps. Each battalion numbered over a thousand men and consisted of a headquarters battery and four firing batteries. Each battery consisted of two platoons, with each platoon having four guns. Every battalion was further augmented by an attached M55 Quad .50 caliber machine gun battery and an artillery searchlight battery.

Although by 1966 the M42 was a fourteen year old system which had seen little combat, it was during the Vietnam War that the Duster came into its own. The North Vietnamese Air Force, relatively small and committed solely to air-to-air operations over its own airspace, posed no threat to U.S. ground forces. This gave the Duster the freedom to serve in a purely ground support role.

Dusters were usually deployed in pairs. Their massive firepower caused havoc and instilled sheer terror in the Viet Cong. “The VC call them ‘Fire Dragons’ because they don’t know what to make of them. Giving up is a pretty common occurrence,” recalled 1LT Gene S. Lucas, 5/2nd Artillery. “Charlie doesn’t usually mess with us, unless he hasn’t seen a duster before. If the VC have ever come against one before, they’ll usually stay away,” added SGT Ernest Smith, 5/2nd Artillery.

Because the dense jungle terrain caused severe wear on the Duster’s gasoline engine (which was susceptible to catching fire when overheated), transmission, and suspension, the vehicle could not fully utilize its cross country capability. Furthermore, the 40mm’s point-detonating ammunition had a very sensitive fuse which had a limited effect in the thick jungle foliage. As a result, the Duster was used primarily for point security, convoy escort, and perimeter defense. Other missions included counter-mortar fire, counter-rocket fire, and infantry support. The M42 also cruised the waters of the Mekong Delta aboard M8 landing craft, providing fire support for the 9th Infantry Division’s Mobile Riverine Force.

Having a Duster on point would give a sense of safety to accompanying ground troops and guarantee superior fire support if attacked. In convoy escort, the Duster’s speed, firepower, and armor protection served as a significant deterrent to enemy ambush. It was in their role of perimeter security, however, that the Duster’s could really shine. With their rapid rate of fire and the fifty meter bursting radius of their high explosive rounds, the Dusters were perfect for shattering enemy attacks and troop concentrations.

Dusters could also perform indirect fire missions using targeting data from artillery fire-direction centers. They were able to fire faster than standard artillery pieces with pinpoint accuracy at short ranges and put up a wall of fire on automatic or engage with a single round which allowed them greater target accessibility. On night security, the Dusters were paired with a searchlight set on infrared mode which could sweep an area without revealing its position. Once a target was detected, visible light mode was used to illuminate and engage the target.

In 1971 the Army began to withdraw its ADA units from Vietnam. By the middle of 1972 the Dusters, now twenty years old, were all gone. During their six year tour, the Duster’s had fired over four million rounds, all in a ground support role. Though over thirty years have passed since the Dusters last saw action, they can still be found in museums, military vehicle parks and, occasionally, driven in a parade by proud, smiling veterans who still remember their days with the “fire dragons.”