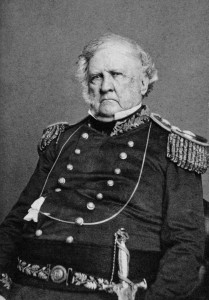 Winfield Scott was born near Petersburg, Virginia, on 13 June 1786. He attended William and Mary College for a time and then studied law in Virginia. Scott then enlisted in Petersburg’s cavalry troop and subsequently became a captain in the Regular Army in 1808.

Scott reported for duty in New Orleans, under the command of Major General James Wilkinson. Wilkinson was engaged in some shady personal ventures and speculations. Disturbed by the state of the Army, Scott resigned his commission and returned to Virginia. However, he reconsidered his actions in the light of possible war with Great Britain, and he asked the Secretary of War to ignore his letter of resignation. Returning to New Orleans, he was soon court-martialed for his continuing insubordinate criticism of Wilkinson. The court-martial suspended Scott from the Army for a year.

Returning to the Army in time for the War of 1812, Scott was promoted to lieutenant colonel in 1812 and then colonel in 1813. He was captured and paroled, then fought at Fort George and Uphold’s Creek. Promoted to brigadier general, he successfully defeated the British at Chippewa and Lundy’s Lane. At Lundy’s Lane, Scott was seriously wounded, and for his heroism he was brevetted major general in July 1814.

After the war, Scott sat on or headed several administrative and review boards and then traveled to France to study French tactics from 1815 to 1816. When he returned from Europe, he became the commander of the Division of the North. In 1817, he married Maria D. Mayo and in 1825, he commanded the Division of the East. When the issue of nullification burgeoned into a crisis in 1832, he was appointed as a presidential emissary to South Carolina. Afterwards, he led the Army forces in the Second Seminole War and the Creek War of 1836. In 1838, he effected the removal of the Cherokees to the trans-Mississippi region.

In 1839, he helped resolve a border dispute between Maine and New Brunswick, Canada. Two years later, he was promoted to major general; he served as commanding general of the Army from 5 July 1841 to 1 November 1861.

War broke out between Mexico and the United States in late April, 1846. Scott was responsible for the enlistment and training of the new volunteers; President Polk had called upon 20,000 volunteers to join the Army, and Congress actually authorized 50,000 volunteers. He then commanded the Vera Cruz invasion, which was successful. Scott and the Army then stormed through Mexico into Mexico City in September, 1847. The war ended and Scott became a national celebrity.

Scott ran unsuccessfully for president, as a Whig, in 1852. In 1855, he was made a brevet lieutenant general. As the Civil War approached, Scott developed plans to defeat the Confederacy, but resigned as general in chief in 1861, before his plans could be carried out. Scott died at West Point, New York, on 19 May 1866.