The “Why My Brick” program continues to flourish as more and more commemorative bricks are purchased to “pave the way to Army history” at the National Museum of the United States Army. “Why My Brick” invites brick purchasers to tell the personal stories and motivation behind their commemorative bricks and also serves as another way the National Army Museum will preserve the stories of individual Soldiers for generations to come.

The Army Historical Foundation has received a variety of “Why My Brick” stories from those honoring long-lost ancestors, Soldiers currently serving, and children of Soldiers honoring their parents’ service. These personalized bricks ensure their Army legacy is preserved to be shared with grandchildren, great grandchildren, and beyond.

In William Frappier’s “Why My Brick” testimonial, he explains that he purchased a brick to honor his father’s heroic and decorated service during World War II. SGT Philip C. Frappier served in the China-Burma-India Theater with the 1346th Army Air Force Base Unit, Bengal Wing, India-China Division, for three years. Working as a radio operator, SGT Frappier went on over 100 missions. “During his India-China tour he flew the ‘hump’ many times and he was involved in at least three crash landings when the landing gears of the planes did not lower,” Frappier’s son explains. Among his decorations, SGT Frappier earned the Distinguished Flying Cross, Distinguished Unit Award, and Asiatic-Pacific Campaign Medal with two bronze service stars. 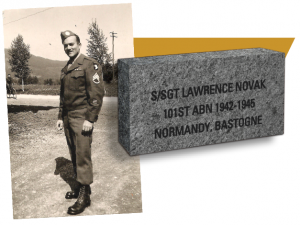 SSG Lawrence Novak’s service is honored by a personalized brick purchased by his daughters, Janice and Jeannette Novak. SSG Novak served with the 101st Airborne Division “Screaming Eagles” during World War II. SSG Novak didn’t share much about his wartime experiences with his family. As a result, the sisters joined the Michigan Chapter of the 101st Airborne Division Association and have reached out to other veterans to “understand [their father’s] experience through the stories told by other veterans,” including his participation on D-Day when he landed behind Utah Beach and later assisted in the liberation of Nazi concentration camps. This Army Museum brick “gives us the chance to honor our father’s memory and gives our family a chance to connect with his heroic service,” the Novak sisters wrote.

In a similar way, the “Why My Brick” program is a perfect way for Soldier stories to be preserved and shared forever with the greater Army family.

For more information on the Army Museum Brick Program and to read more “Why My Brick” stories, visit armyhistory.org/bricks or call 855-ARMY-BRX.