The Army Historical Foundation (AHF) presented its second and third exhibits in The Soldier Experience Series—Women in the Army: Choosing to Serve, and Asian-American and Pacific Islander Soldier Stories: Honor and Valor, to celebrate both Women’s History Month and Asian-American and Pacific Islander (AAPI) Heritage Month, in March and May, respectively. Both were immersive looks at the stories of these unique groups throughout the Army’s history. They were designed as preludes to the future National Museum of the United States Army which will showcase the extraordinary story of American Soldiers throughout the Army’s 241-year history. 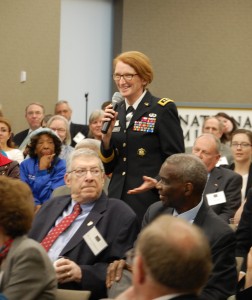 During the American Revolution, female camp followers took care of the Army’s needs while a few women like Deborah Sampson dressed as men to fight. In subsequent years, women volunteered as nurses or other aides, particularly during the Civil War. The Army employed female contract nurses during the Spanish-American War before giving women an official role in the army in 1901 with the creation of the Army Nurse Corps. In addition to the Army nurses, during World War I women continued to work as paid contractors such as the “Hello Girls” who operated Signal Corps switchboards. Others supported the Army in auxiliary organizations such as the YMCA or with the Red Cross.

With the creation of the Women’s Auxiliary Army Corps (WAAC) in 1942, which became the Women’s Army Corps (WAC) in 1943, women finally gained military rank and veteran status. Women served in the WAC and supported the Korean War, Vietnam War, and Cold War until 1978, when the Army integrated women into all but the combat arms branches. A major milestone occurred in 2013 with the lifting of the ban on women in combat.

The Asian-American and Pacific Islander exhibit, the third installation of The Soldier Experience Series, explored the honor and valor of Americans of Chinese, Filipino, Japanese, Korean, Vietnamese, South Asian, and Hmong/Laotian/Montagnard/Cambodian descent. 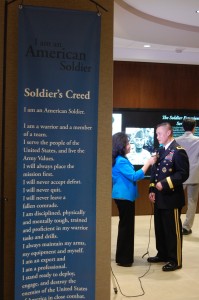 Visitors to the exhibit learned the stories of a diverse group of different ethnic people who came from the far reaches of Asia and the Pacific Islands to settle in communities throughout the United States. Hundreds served during the Civil War with Union and Confederate units and they have continued to serve throughout the Army’s history.

The exhibit explored such stories as the heroism of the Nisei Soldiers of the 442d Regimental Combat Team during World War II; the fascinating story of Chinese-American Soldiers from the Mississippi Delta region; Korean and Vietnamese Soldiers who served valiantly in the Army; as well as the South Asian Soldiers—descendants of those from India, Pakistan, Nepal etc.—who demonstrated their willingness and commitment to serve in uniform.

Their stories—many forgotten, ignored, or untold—serve as a reminder for all Americans of their proof of honor, loyalty and duty to this country, and the legacy of the battle for civil rights and against injustice. 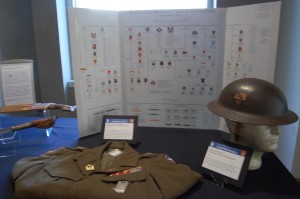 A fourth installment of The Soldier Experience Series is planned for September of this year. It will focus on the history of Observation Point Alpha, originally manned by the U.S. Army constabulary units near Rasdorf, Germany, after World War II. Located near the Fulda Gap, it was one of the key areas where large numbers of U.S. Soldiers and Soviet forces were stationed in opposing positions along the border between East and West Germany. Stay tuned for more information on this upcoming exhibit.