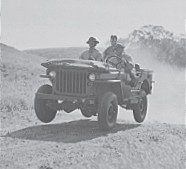 War correspondent Ernie Pyle wrote, “It does everything. It goes everywhere. It’s as faithful as a dog, as strong as a mule, and as agile as a goat.”

It wasn’t enough that World War II ally Marshall Joseph Stalin was to get 5,000 under provisions of the Lend-Lease program; he wanted more, telling U.S. officials, “This is a war of motors.

It is impossible to have too many of them, and the side having the largest number of motors is bound to win.”

Marshall, Pyle, and Stalin were heaping praises on the Jeep*, the ubiquitous US lightweight utility reconnaissance vehicle that traversed the deserts, forests, and beaches of the European and Pacific theaters and navigated the rugged mountains and dense jungles of the China-Burma-India Theater.

The Jeep met a longstanding need that had been apparent to Army officials since the end of World War I. There was no utility vehicle that could do what the Army had been relying for years on mules, wagons, motorcycles, cars, and trucks to do. Now, with America’s entry into World War II imminent, the Quartermaster Corps scrambled to issue specifications and solicit bids for production of a general purpose (GP) vehicle. Most notable among the requirements were four-wheel drive, an 80” wheelbase, at least four cylinders, an attainable speed of 50 mph on hard surface, a .30-caliber machine gun mount, blackout lights, a folding windshield and bucket seats, and a maximum weight of 1,275 pounds.

The Army solicited bids for the vehicle from over a hundred companies, but only the Bantam Motor Company and Willys-Overland responded. Although Bantam’s prototype was selected, the company could not sustain productions schedules so the Army transferred the contract and Bantam’s specifications to Willys-Overland and Ford Motor Company to modify and improve. The Willys-Overland model eventually won out.
Between July 1941 and war’s end, over 650,000 Jeeps were produced. The British, Australians, Free French, and Chinese were among recipients of Jeeps under Lend-Lease in addition to the
Soviets.

The Americans used Jeeps for troop transport, reconnaissance, ambulance The service, and towing supply trailers. The Jeeps also doubled as weapons platforms and mobile command posts. Many a commander used the Jeep’s hood as his map table and many a chaplain used the hood as a field altar. Fit Jeeps with flanged steel wheels and they could pull railroad cars. The Jeeps were versatile, maneuverable, dependable, and virtually indestructible. And the troops loved them, despite the cramped rear seating area, the occasionally faulty hand brake, and the torturously uncomfortable seats that caused hemorrhoids, or what the medics called “Jeep disease.”

The WW II Jeep’s appearance remained practically unchanged and its outstanding performance was reprised in Korea (as the M38) and in Vietnam (as the M151 MUTT). In 1984, the Jeep was replaced by AM General’s High Mobility Multipurpose Wheeled Vehicle (HMMWV).

* The origin of the Jeep nickname remains in dispute. Various possibilities are addressed in “Origins of the JEEP Name,” On Point: The Journal of Army History, Winter 2005/2006, p.10.