SGT Richard Cade (USA-Ret.) of Birmingham, Ala. recently read about the campaign to build the National Museum of the United States Army and he decided to act. Unknowingly, the timing of his donation also earned him the distinction of becoming the 1,000th member of the Campaign’s The 1814 Society. 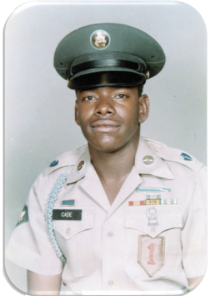 Cade served more than 20 years total in the active Army, Army National Guard, and U.S. Army Reserve. When reading about the Campaign for the National Army Museum Cade thought it would be fitting to make a donation. “There is a lot of history in the Army and military traditions that go way back,” Cade commented. “During the Vietnam War, I served with the 1st Infantry Division – ‘The Big Red One’ – and their history goes all the way back to the War of 1812.”

Inspired by the 1814 legislation mandating the Secretary of War gather symbols of combat from the War of Independence and the War of 1812, the name, The 1814 Society, was chosen to represent a select group of individuals who donate $1,000 or more and share a desire to see the Army’s history preserved and exhibited for future generations.

Members of The 1814 Society have contributed over $3.6 million to the Campaign to date and will sponsor the artistic representation of the U.S. Army battle streamers in the National Army Museum’s main lobby. In addition to their unique sponsorship, The 1814 Society members are invited to an exclusive annual event which updates members on the Museum project and allows for personal interaction with key members working on the Museum.

Upon learning of his status as the 1,000th member, Cade reflected that his grandfather and father served in the Army, and his brother served in the Navy. “Truthfully, I didn’t know the Army didn’t have a national museum,” Cade continued. “I enjoyed my Army career and I’m happy to support this cause.”

For more information, or to join The 1814 Society, contact Beth Schultz Seaman, Director of Grassroots Development, at 703-879-0006 or beth.schultz@armyhistory.org.