Over 80 members of The 1814 Society gathered on December 2 at the Fort Belvoir Golf Club adjacent to the future site of the National Museum of the United States Army for an exclusive report on Museum progress delivered by Mr. Steve Huffman, President of Huffman Developments of San Antonio, Texas. 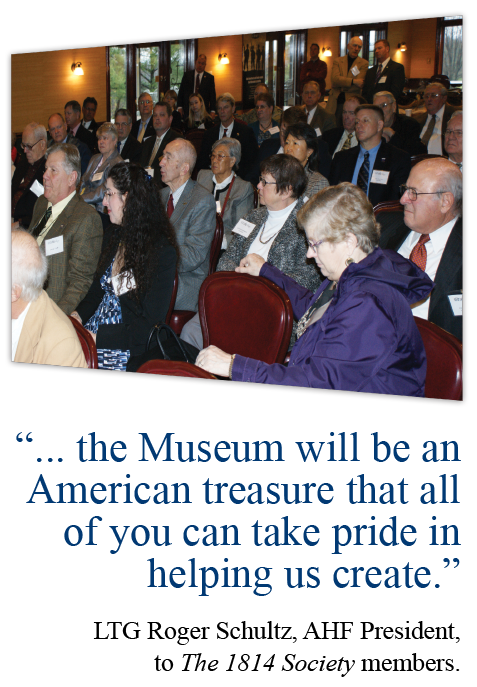 Earlier this year The Army Historical Foundation (AHF) selected Huffman and his associates as the “Owner’s Representative” to oversee development of the Museum project in conjunction with AHF officials.

Huffman, who recently joined The 1814 Society, provided fellow society members with a retrospective view of progress made during 2015 and delineated the strategy for opening the Museum in 2019. He began by discussing Founders Hall, a permanent 13,000 square foot facility that will be built early next year. The multi-purpose facility will provide pre- and post- Museum construction activities related to orientation, cultivation, marketing, education, training, and revenue generating activities.

“While the Museum is being constructed, Founders Hall will serve mainly as an observation point to monitor construction progress as well as a venue to cultivate prospective Museum supporters. There will be space for artifacts and a state-of-the-art multi-media area to showcase compelling features of the future Museum,” Huffman said. “Once the Museum is built, the facility will serve as a revenue generating venue for conferences, catered events, corporate displays, gift and book shop, and office space for the AHF staff.”
According to Huffman, the final design drawings for Founders Hall have been approved by Army leadership and Fort Belvoir officials and are currently under review by the National Capital Planning Commission. Construction is scheduled to begin April 2016.

Huffman also recounted two key administrative actions that occurred to advance Museum planning and construction during 2015. The first was formalization of an affiliation agreement between AHF and the Association of the United States Army (AUSA) based on both organizations’ shared vision that the Museum must be built. Executed on June 4, the agreement created the financial resources required by Congress to release $25 million in previously authorized and appropriated military construction funds toward development of the infrastructure costs for completion of the baseline Museum.

The second was an updated Memorandum of Agreement between AHF and the Army signed on July 1 and detailing AHF’s commitment for construction and delivery of the Museum to the Army as well as outlining the terms of the 50-year lease agreement which is expected to be completed in the next month or two.

Huffman said the Museum project was initially planned to be developed by the U.S. Army Corps of Engineers, but after thorough analysis and extensive consultation, the AHF Board determined that by selecting a private sector contractor, various major cost efficiencies would be realized, to include opportunities for gifts in kind and value engineering.

Huffman reported that in mid-September, AHF had selected Clark Construction Group, one of the oldest and most successful construction contract firms in the country, to develop the baseline Museum and Exhibit Wing for a guaranteed maximum price of $111.5 million. The contract also identified deferred elements such as the Parade Ground and Grandstand, Memorial Garden, Amphitheater, and Army Trail for a guaranteed maximum price of $9.3 million.

“Clark has extensive experience with museums,” Huffman told the group. “The firm is currently wrapping up construction of the National Museum of African American History and Culture, and has either completed or is working on several others in the Washington area, to include the National Museum of the American Indian, the U.S. Institute of Peace, and the National Law Enforcement Museum.”

Huffman also mentioned, construction planning had been hampered somewhat by environmental challenges that required testing to ensure that Museum construction would not be jeopardizing any threatened or endangered species such as the small whorled pogonia, a member of the orchid family, or the Northern long-eared bat.

Testing during May to August of 2015 indicated that there were no pogonia plants on the site, but a more extensive search required acoustical surveying as well as mist netting between May and October to determine whether a bat colony was present. Huffman said the results of that testing requires consultation with the U.S. Fish and Wildlife Service which will be part of a Supplemental Environmental Assessment that will be completed by year’s end.

As a final note, Huffman said that the new groundbreaking ceremony date will be scheduled sometime in April 2016, Museum construction will begin in October 2016, and the opening is projected for June 14, 2019, the Army’s 244th birthday. Huffman then invited The 1814 Society members to travel to the future Museum grounds for an on-site orientation by Colonel Darcy Brewer (USA-Ret.), of Huffman Developments.

Before adjourning, LTG Roger Schultz (USA-Ret.), AHF President, presented Huffman with a framed limited print by former Army artist-in-residence MSG Martin Cervantez (USA-Ret.) titled Treacherous Corner. “I want to thank Steve for a terrific presentation, and equally important, I want to thank all of you here this afternoon for your continuing support of the Museum project. A great Army deserves a great Museum, and the Museum will be an American treasure that all of you can take pride in helping us create.”