The 2014 National Museum of the United States Army holiday ornament commemorates the Vietnam War. The sixth in a series of holiday ornaments depicting Soldier images in U.S. Army history, the ornament features a watercolor titled “Member of the 101st Airborne,” by the late Peter F. Copeland.

The National Army Museum logo appears on the reverse of the ornament with a historical quote from Vietnam Veteran Tim O’Brien’s “The Things They Carried,” a war memoir that probes the metaphorical impact of physical and emotional burdens Soldiers carry into combat.

This attractive collectible ornament is made by U.S. craftsmen from solid brass and finished in 24 karat gold, measuring 2 ½ inches wide by 3 ½ inches high. Each ornament is packaged in a National Army Museum gift box with an enclosure card detailing its design. The ornament can be purchased for $16. 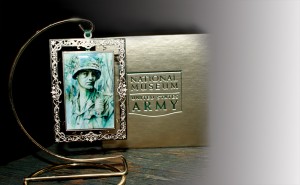 The National Museum of the United States Army 2015 Calendar highlights Army history throughout the year. Each monthly page of the calendar features significant dates throughout Army history, Soldier photographs selected from The Army Historical Foundation’s Registry of the American Soldier, and a selected piece of artwork from the Army Art Collection that relates to the significant dates and/or the Soldiers featured that month. Museum supporters received their 2015 calendars in October and additional copies can be purchased for $10.