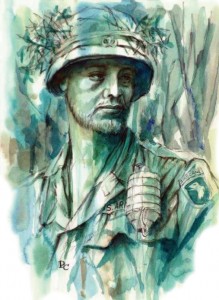 The National Museum of the United States Army has revealed the sixth in its series of holiday ornaments depicting Soldier images in U.S. Army history. This year’s ornament commemorates the Vietnam War and features the artwork of the late Peter F. Copeland.

Copeland served with the U.S. Merchant Marine during World War II, and after the war, he served two years in the U.S. Army Transportation Corps. He joined the Company of Military Historians in 1959 and volunteered as a civilian combat artist with the Army in Vietnam in 1967. Copeland contributed more than 40 watercolor paintings to the U.S. Army’s Center of Military History’s Army Art Collection. The Soldier image shown on this year’s ornament is a watercolor titled “Member of the 101st Airborne.”

The National Army Museum logo appears on the reverse of the ornament with a historical quote from Vietnam Veteran Tim O’Brien’s “The Things They Carried,” a war memoir that probes the metaphorical impact of physical and emotional burdens Soldiers carry into combat.

This attractive collectible ornament is made by U.S. craftsmen from solid brass and finished in 24 karat gold, measuring 2 ½ inches wide by 3 ½ inches high. Each ornament is packaged in a gift box with an enclosure card detailing its design. The ornament sells for $16 and can be purchased on line through the Museum Store at armyhistory.org or by calling (800) 506-2672.