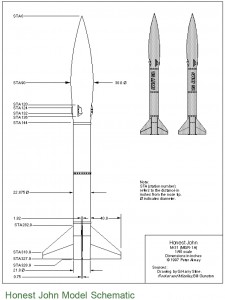 During the Cold War, America’s Soldiers served around the world, deterring the Soviet Union from enlarging its communist empire. “The Army in the Cold War” exhibit area in the Cold War gallery, sponsored by the Pritzker Military Museum & Library, provides visitors with a comprehensive overview of the U.S. Army’s actions.

As visitors cross the threshold into “The Army in the Cold War” exhibit area, they are immersed in an evocative space that suggests a U.S. Army headquarters location in Germany of the 1950s, ‘60s, and ‘70s. Adorned with metal filing cabinets and desks; strategic maps with grease-pencil-covered acetate overlays; a consistent, neutral color, highly polished floor surface; and cold blue lights, the design has a surreal and slightly ominous feel. Hanging above the entire exhibit area are replicated MGR-1 Honest John missiles.

Within this carefully crafted design, visitors learn that during this time in history a significant portion of U.S. Army forces were serving in Europe, prepared for an expected invasion of our allies by the Soviet Union. The Army was ready for World War III and had reorganized its forces, explored the use of tactical nuclear weapons, and fully expected to be engaging with the Soviets in Europe. 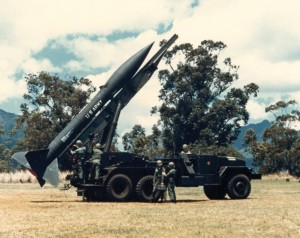 A brief video explains the key events of the Cold War and conveys the rising tensions of the era. In an unexpected twist, the video screen goes blank and a red phone begins to ring urgently, taking visitors into an immersive multimedia experience. Viewers are now inside the command center as the Army rehearses its part of the NATO plan, manning the defense line between East and West Germany against an invasion by Warsaw Pact forces. Multiple video monitors displaying archival footage of Cold War operations allow visitors to see the action unfold on simultaneous fronts. First, Soldiers are roused out of bed by sirens, then the video follows four-star generals of the Central Army Group, next the video pans to division commanders setting up headquarters in the field, and then viewers see troops heading to their initial battle positions.

Accompanying narration emphasizes that each time the alarm sounded, Soldiers did not know whether it was a drill or the beginning of war. By ending on this uncertain note, visitors gain a true sense of the anxiety and unsettled nature of the war between two nuclear-armed superpowers that haunted five decades. However, the video also provides a reassuring sense that had Soviet tanks rumbled across the German border, the General Defense Plan would be executed by a well prepared U.S. Army.

Additional exhibits set into the wall provide context to the Army’s role during the Cold War. Compelling artifacts, including protective masks and self-injection devices carried by Soldiers in case of a chemical weapons attack, underscore the seriousness of the potential move beyond a standoff. A timeline provides a chronological summary of the Cold War, including the Berlin Blockade and the construction and eventual removal of the Berlin Wall, and actions taken to contain communism in Southeast Asia, Latin America, and the Far East.