Upon entering the National Museum of the United States Army, visitors will find themselves in the Museum Lobby—the gateway to the National Army Museum experience.  The inviting 7,500 square-foot Lobby will welcome and orient visitors to the various Museum galleries and activities.  The Lobby’s design will allow the Museum to meet multi-purpose needs during non-Museum hours, including special events, ceremonies, and dinners.  Etched into the floor of the Lobby is a large image of the Army Seal. 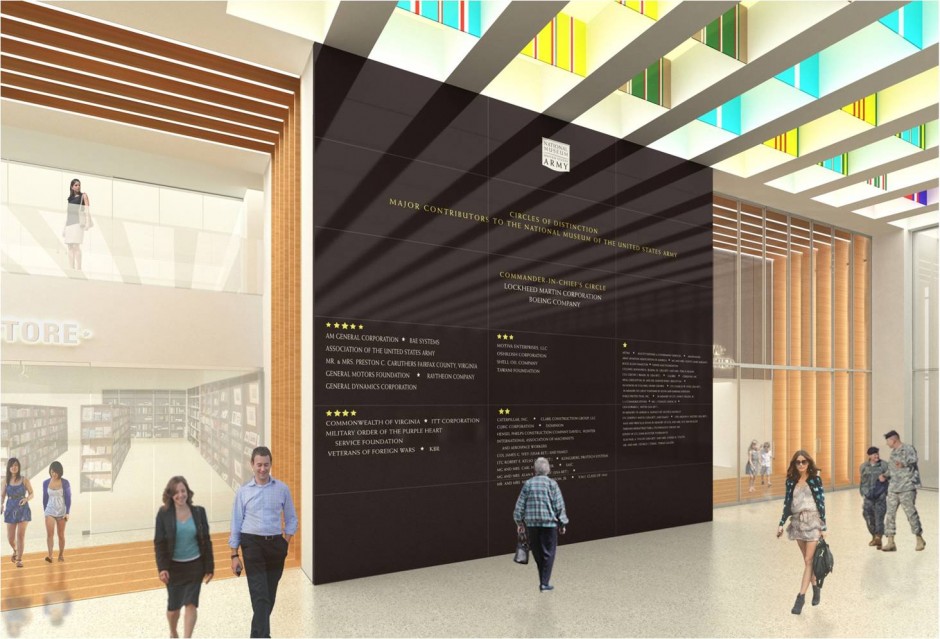 Visitors will notice the continuation of the Soldiers’ Stories Gallery (sponsored by The Boeing Company) with seven more pylons featuring personal accounts of ordinary men and women from all historic periods and walks of life to introduce visitors to Army history.  These seven pylons will line an interior wall of the lobby leading to the full Soldier’ Stories Gallery located just off the lobby, continuing the marching formation feel initiated from the pylons outside the Museum.

A Donor Wall will be a prominent feature of the Lobby.  The names of individuals, corporations, foundations, and organizations who have donated within one of the five circles of distinction or the Commander-in-Chief’s Circle, will be displayed on the Wall.

Campaign streamers will also be represented in colorful and dramatic glass panels in the ceiling of the Lobby that will be illuminated through high windows in the Museum’s grand lobby.  These beautiful streamers are sponsored by members of the Army Historical Foundation’s The 1814 Society.

The Lobby will provide visitors with the first interior impression of the Army’s expansive history, as well as provide instant access to the retail store, the Museum’s café, and the immersive Experiential Learning Center (sponsored by Lockheed Martin).