The broad and symbiotic relationship between the Army and American society has been a formative aspect of the country as a whole since the Army’s creation in 1775. The Army and Society Gallery explores the many ways in which the relationships between the Army, its civilian government, and the people have shaped American history. As no other known American military museum hosts a gallery that addresses such topics, this gallery, an idea conceived by Jody Davis, Vice President of the Army Historical Foundation’s Board of Directors and former Chief Curator for the National Museum of the United States Army, will be a standout attraction of the National Army Museum. 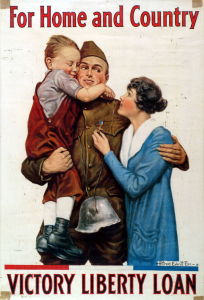 The 9,900 square-foot gallery will consist of five major areas—“Civilian Control of the Military,” “Innovation and Invention,” “Reflecting and Changing,” “Army Supporting the Nation,” and “Nation Supporting the Army.”

Throughout the gallery, visitors will witness changing images of Soldiers and citizens, an LED “ticker tape” streaming the most up-to-date current events, Army facts, and personal stories connecting visitors to the history on an individual level.

Moving into the first distinct area of the gallery, “Civilian Control of the Military,” visitors will learn of the crucial moment in American history when General George Washington impressed to his disgruntled officers at Newburgh the necessity of having an Army controlled by its civilian government.

In the “Innovation and Invention” gallery space, which is sponsored by Sikorsky Aircraft and United Technologies Corporation, visitors will see a Sikorsky YR-4 helicopter hovering overhead. The only existing reproduction of Orville and Wilbur Wright’s 1908 Wright Flyer, sponsored by the FedEx Corporation, and a lifelike scene of Soldiers unloading supplies from a Liberty Truck will serve as examples for important contributions the Army has made to American transportation and technology.

The “Reflecting and Changing” area, sponsored by Steward Family Foundation and World Wide Technology, will address the many milestones in American and Army history that have changed the Army from an all-white and all-male force to the diverse group of Soldiers that exists today. By delving into a timeline, personal scrapbooks, and revealing artifacts, visitors will discover the ways the Army has created both opportunities for and limitations to Soldiers of different backgrounds. 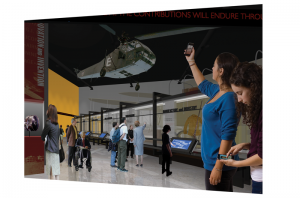 Visitors will leave the Army and Society Gallery with a greater understanding of the deeply rooted history shared between the Army and American society that stems far beyond defending the nation.