As supporters of the National Museum of the United States Army continue to purchase Commemorative Bricks, they also continue to contribute stories to the “Why My 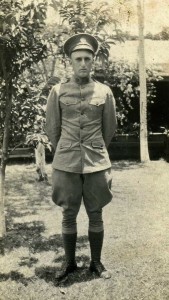 Brick” program which allows individuals to explain the impetus for their specific brick purchases.  Ms. Martha Iverson-Carpenter of Ames, Iowa, recently shared the stories behind five brick purchases.  These bricks honor Soldiers whose service spans the past century.  Among those honored by Ms. Iverson-Carpenter was John Iverson, who was drafted on May 26, 1918.  He served with the 88th Division in France during World War I.  Another brick remembers Arthur R. Moore, who enlisted in 1923.  He served as a private in the 68th Company of the Coast Artillery Corps.

Sherman Iverson was drafted into the Army on May 14, 1942 and sent to a Quartermaster Training Regiment at Fort Warren, Wyoming.  He was assigned to Company D, 95th Quartermaster Bakery Company.  Ms. Iverson-Carpenter recalled him noting that the company was made up of only carpenters, shoe repairmen, and truck drivers.  Iverson said, “I hope they give us a couple months more training for we sure need it.”  He landed in Morocco on April 24, 1943, and he served until the war ended in 1945.

Paul L. Carpenter enlisted in the Army on February 19, 1946.  He graduated from Airborne School at Fort Benning, Ga.  He was a clarinetist in the 82nd Airborne Division Band and was discharged in 1947.  Lastly, Stanley C. Carpenter was a commissioned a Second Lieutenant on May 16, 1974, 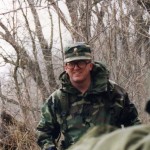 after completion of ROTC at the University of Iowa, Iowa City.  By the end of his service in 1998, he had received the Expert Infantrymen Badge, Parachutist Badge, and Legion of Merit.

As the National Museum of the United States Army’s Commemorative Brick program continues its success, the “Why My Brick” program allows added depth to the many stories that will be honored throughout the Museum’s grounds.  Ms. Iverson-Carpenter’s bricks emphasize the connection between different generations and the many ways the Army connects individuals who have served in various wars and time periods.

For more information on the Army Museum Brick Program and to read more “Why My Brick” stories, visit armyhistory.org/bricks or call 855-Army-BRX.