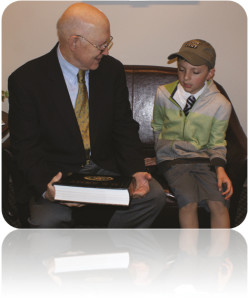 If you missed Myles’ story, here’s why it impressed AHF’s Board of Directors, prompting them to acknowledge his thoughtfulness.

Myles found a $20 bill heading into in a Maumee, Ohio Cracker Barrel restaurant. Excited, he told his mom, Tiffany, that he was thinking of spending the money on a video game. He changed his mind inside the restaurant once he spotted Air Force Lt. Col. Frank Dailey and his family having dinner. The officer reminded Myles of his dad, Sergeant Andy Eckert, who was killed in Iraq when Myles was only five weeks old.

So with his dad in mind, Myles wrapped the $20 bill in a note that said, “Dear Soldier—my dad was a soldier. He’s in heaven now. I found this 20 dollars in the parking lot when we got here. We like to pay it forward in my family. It’s your lucky day. Thank you for your service. Myles Eckert, a gold star kid.”

Myles told CBS he gave the money to Dailey “because he was a soldier, and soldiers remind me of my dad.”

Dailey kept the note but paid forward Myles’ gift to a charity. Meanwhile, many CBS viewers wanted Myles to have a $20 bill. Instead, the Eckerts referred viewers to Snowball Express, which helps children who’ve lost a parent in war. Over a quarter of a million dollars has been paid forward to the charity since Myles got the “Snowball” rolling.

When AHF learned that Myles was also interested in Army history and would be in Washington, D.C. at Easter time, he and his family were invited to visit the Foundation, where he was presented a Lifetime Membership, a copy of AHF’s “U.S. Army: A Complete History,” and a plaque commemorating his dad, an honoree in AHF’sRegistry of the American Soldier.

“Myles, thank you for what you did,” said BG Creighton W. Abrams, Jr. (USA-Ret.) in making the presentation. “It made us feel good about being Soldiers and about what we are doing to bring Army history alive.”