Kazuo Yamane, a veteran of World War II, was one of many Japanese-Americans who served their nation despite widespread discrimination against Americans of Japanese descent. As a master sergeant in the 100th Infantry Battalion (Separate), primarily a Japanese-American military unit and later the Military Intelligence Service (MIS), Yamane’s story of duty and self-sacrifice embodies what it means to be a Soldier in the United States Army.

“Our father always considered his service during WW II as the most important time of his life, as he and all the Nisei* veterans proved their loyalty to their country,” explained Joyce Yamane, daughter of MSG Yamane. Because of this, Ms. Yamane and her husband, Stephen Waite, have recently made a gift to the National Museum of the United States Army (NMUSA) in honor of her father. Ms. Yamane added, “The Kazuo and Mary Yamane Family is hon 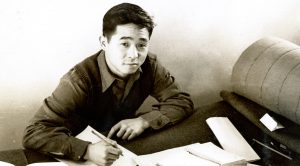 ored to support the National Museum of the United States Army with this gift.” 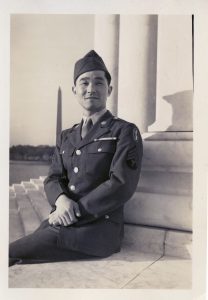 MSG Yamane was one of three brothers to serve in the MIS; another brother served with the 442nd Regimental Combat Team. MSG Yamane was sent to Camp Ritchie, Md. to help establish the Pacific Military Intelligence Research Section (PACMIRS). In 1944, while at work sorting through crates of papers captured at Saipan, he discovered a highly classified document that contained inventory of Imperial Japanese Army ordnance, with detailed descriptions of all the armaments in the Japanese inventory and locations of arms, ammunition depots, and manufacturing plants in Japan. Yamane’s discovery gave valued targeting information for the Allied aerial campaign against Japan.

MSG Yamane and two other MIS Nisei Soldiers were assigned to Supreme Headquarters Allied Expeditionary Forces (SHAEF) in France and given the task of conducting a covert mission into Berlin with a detachment of British commandos to collect documents from the Japanese Embassy. When the mission was cancelled the team members were sent to different parts of Europe. MSG Yamane was in Yugoslavia on V-E Day.

Thankfully he and his brothers all returned safely from the war. Back in Hawaii, Yamane, returning to civilian life, operated a successful family business. In 1997, he was awarded the Legion of Merit for “exceptionally meritorious conduct in the performance of duties which profoundly influenced the successful outcome of the war against Japan.” Yamane passed away on April 28, 2010, at the age of 93

In October 2010, Congress awarded Japanese-American World War II veterans of the 100th Infantry Battalion, the 442nd Regimental Combat Team, and the Military Intelligence Service the Congressional Gold Medal in recognition of their service during the war. “MSG Yamane and his JapaneseAmerican comrades served valiantly throughout WW II despite facing immense obstacles at home. It is important to recognize those groups of people who have made significant sacrifices for their country in the face of adversity,” noted General Gordon R. Sullivan (USA-Ret.), Army Historical Foundation’s Board Chairman. “We are indebted to MSG Yamane’s brave and distinguished service during the war and appreciate the Yamane family’s support of this important project to ensure that each Soldier’s story is preserved for future generations.”