Ballard, a 26-year-old platoon leader with the 1st Armored Division’s 2nd Battalion, 37th Armored Regiment, was killed on May 30, 2004, in Najaf, Iraq. His mother, Karen Meredith of Mountain View, Calif., enrolled him in the Registry. 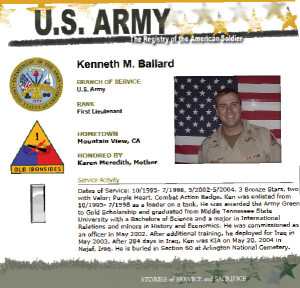 “My son Ken dreamed of being a Soldier since he was very young,” Meredith said when told that Ballard wasthe Registry’s 100,000th honoree. “He represents everything that is good about our best and brightest who serve in the U.S. Army. His family and I are truly proud.”

A fourth generation Army officer, Ballard enlisted in the Army in 1995, completed basic training at Fort Knox, and served as a loader on an M1-A1 Abrams tank in Germany until 1998. His initial European assignment with the 1st Armored Division included deployments to Bosnia and Macedonia.

In mid-1998, Ballard was awarded a Green to Gold Army ROTC scholarship that led to his commission as a second lieutenant of Armor and graduation from Middle Tennessee State University in 2002 with a B.A. in International Relations.

Ballard returned to Germany and the 1st Armored Division for his first assignment as an Armor officer. The division deployed to Iraq, with Ballard serving as a platoon leader during periods of intense combat, including the rescue mission of a pinned down American platoon during the April 4, 2004 battle of Sadr City chronicled in ABC News correspondent Martha Raddatz’s “The Long Road Home: A Story of War and Family.”

“Every Soldier enrolled in our Registry will have his or her service history preserved in the future National Museum of the United States Army as a tribute to selfless service and personal sacrifice,” said Richard Couture, AHF’s Deputy Executive Director for Marketing and Operations. “To have LT Ballard, who made the ultimate personal sacrifice, enrolled as the 100,000th honoree is an especially fitting and poignant tribute.”