Over 60 corporate executives, former senior Army leaders, and National Army Museum supporters were on hand on June 16 for the 2014 Industry and Army Leadership Reception sponsored by the Association of the United States Army (AUSA) with The Army Historical Foundation (AHF). 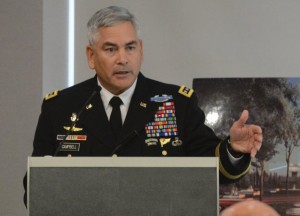 General William W. Hartzog (USA-Ret.), AHF President, emceed the event, announcing that the Capital Campaign for the National Museum of the United States Army recently reached $81 million, thanks to General Dynamics’ decision to increase its original $1 million contribution to $5 million in order to sponsor the Wall of Honor, the dominant display piece of the Museum’s lobby.

“The next two years are critical ones for the campaign because we have an opportunity to finally break ground in 2015 and show tangible results of our effort. We’ve raised $81 million thanks to our corporate, foundation, and over 113,000 individual donors across the country. But we need $33 million more to trigger the Congressional funds, already authorized and appropriated, to pay for the site preparation,” Hartzog explained.

Army Vice Chief of Staff General John F. Campbell, recently confirmed by the Senate to serve as commander of NATO’s International Security Assistance Force and U.S. Forces in Afghanistan, provided the audience with an update on key issues the Army is facing and commented on the importance of the future Museum to the Army community and to the American public.

In his update, Campbell spoke of the complex, unstable, and dynamic operational environment that exists as the Army prepares for the future.

“We are operating with fiscal and manpower constraints, with sustained peer nation-state competitors, and with increasingly powerful non-state actors,” Campbell reported. “We will target science and technology investment, [and] leverage organizational change, training, and leadership to provide ready units to the nation. Force 2025 will be smaller in number, but equal or greater in capability, uniquely enabled and organized with the capability and capacity to conduct expeditionary maneuver of operationally significant forces.”

Addressing the importance of the Museum, Campbell stressed that the American public needs to better understand what the Army has done for them and the nation over the past 239 years.
He pointed out that the Museum will educate the public on the Army’s contributions to the nation’s defense and advancement, preserve Army history, communicate its legacy in an engaging and accessible fashion, honor all who have served, and inspire pride in and strengthen our volunteer force.

Campbell said that meanwhile, the Navy, Marines, and Air Force have far outdone the Army in honoring the contributions of their service on a national level. He said the Navy has had its national museum since 1963, the Marines opened its in 2006, and the Air Force, which has existed as an independent service for only 66 years, recently broke ground for a fourth gallery hanger on its national museum site in Dayton, Ohio.

“There are a number of posts, camps, and stations with their own museums, but we still lack a museum that brings together the entire Army story at the national level. . . . It is time, and it is important, that the greatest Army in the world has a great museum,” Campbell said.