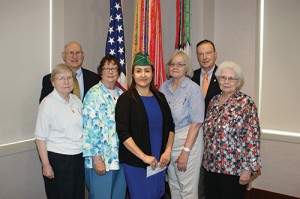 The Army Women Veterans’ Association of Northern Virginia is the latest organization to help sponsor the Veterans’ Hall in the future National Museum of the United States Army.

Officially known as the Northern Virginia Chapter 33 of the Women’s Army Corps Veterans’ Association (WACVA), the chapter was chartered in 1955 and currently has 120 members. Approximately half of its members live in the Washington, DC area while others reside in Alabama, South Carolina, California, Pennsylvania, and the New England area.

Chapter member COL Patricia Jernigan (USA-Ret.) and her husband, LTC David Jernigan, also are Museum founding sponsors and members of The 1814 Society. “The Veterans’ Hall program caught my interest and I thought, ‘this is something we can do, and our chapter should be included on the Veterans’ Hall Wall’.”

LTC Wages added that their organization wants to see female Soldiers represented in the National Army Museum and ensure visitors understand the role of women in Army history. When asked what type of response she received from their members, Wages replied, “Well, we set a three-year timeline for this initiative and we reached our donation goal in just seven months – I think that says it all!”
BG Creighton W. Abrams, Jr. (USA-Ret.) replied, “It is an honor to include your group on the Veterans’ Hall Wall; we will be sure your Army Museum will do justice to the great story of your service.”
When acknowledging their Army service and their gift, MG John P. Herrling (USA-Ret.) added that his great aunt was an Army nurse in WWI, and until the day she died, she considered her time in service as the highlight of her life.

Wages commented that times have changed and most female Soldiers today don’t feel the need to belong to an all-female organization. “That’s a good thing,” added Wages, “but there is a lot of history and experience among the Soldiers in our groups, and we hope younger Soldiers will seek out opportunities to learn from the women who went before them and benefit from their mentorship.”

Herrling noted that is precisely one of the reasons Museum designers were advised to include a Veterans’ Hall – to provide a formal and informal gathering space for all veterans to meet and exchange their stories and experiences.