“Worth coming all the way here to see it.”

That is a sampling of comments by members of The 1814 Society who recently toured the interior of the National Museum of the United States Army(NMUSA) as a highlight of the Society’s twelfth Annual Meeting.

Clad in hard hats, reflective vests, gloves, and safety glasses, over 100 members divided into five groups toured the active construction site, marveling over the design, size, appeal, and construction progress of the Museum that is now considered a little over 90% complete.

Members toured all major interior areas, to include the Army Theater, with its “in the round” features that will provide Museum visitors with a fourth dimensional sensory experience; the Experiential Learning Center, a unique interactive resource center sponsored by Lockheed Martin that includes GSTEM educational programs and simulated rescue mission activities to challenge student visitors; and the Fighting for the Nation Galleries which chronicle throughout six sub-galleries Army history spanning the Revolutionary War to the current conflicts. 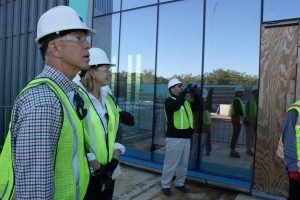 Each group was also visibly excited when shown where the colored ceiling tiles representing the Army’s wars, expeditions, and campaigns– The 1814 Society’s chosen sponsorship–were being tested for color stability.  Society members voted in 2013 to sponsor these iconic tiles that will eventually adorn the Lobby’s ceiling.

“None of what you will see here today would have been possible without the support of our donors.  The 1814 Society has been supporting this project for thirteen years,” Sullivan said.  “Your donations have grown over time, and later today you’ll see an example of the ceiling tiles you elected to sponsor five years ago. We want you to know how much we value your contributions to this endeavor,” he added. 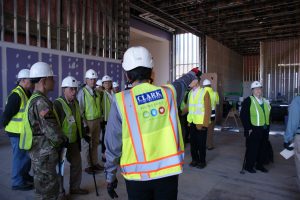 Featured event speaker Jay Barnwell, Jr., President and CEO of Design and Production, Inc., discussed his company’s role in designing, producing, and installing the Museum’s galleries and exhibits, along with his personal role and responsibilities in keeping the installations on schedule and within budget. Barnwell and Ms. Tammy Call, Director of NMUSA, then answered pre-tour questions from the audience.

“The Museum will open within two years,” Ms. Call responded to the question no doubt on the minds of many.  She added that the specific opening date in 2020 would be determined by the Secretary of the Army.

According to Beth Schultz Seaman, Director of Grassroots Development and Manager, The 1814 Society, this year’s event attendees came from eighteen states and as far west as Utah and Nevada.  Colonel Paula Underwood (USA-Ret.) and her husband Juan Jaramillo of Colorado had the good fortune of finding the family’s 8” x 8”  commemorative brick along the partially completed Path of Remembrance that will eventually link the parking lot with  the Museum .

“It was very exciting to be able to host this event—the first of its kind–inside the Museum walls in the still-under-construction Veterans’ Hall. The members didn’t mind wearing the protective gear or sidestepping construction equipment and materiel, and many commented that they enjoyed the ‘sneak peek’ and ‘behind the scenes’ look at what’s been happening since groundbreaking.  No question—they saw real progress, and they liked it,” Schultz Seaman said.